Semmy Schilt going to the UFC is completely bogus 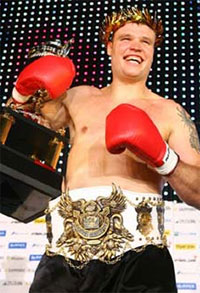 I’ve never been struck by Semmy Schilt. Hopefully, that statement will hold true for the rest of my life. Just based on the physical reactions of everyone at the K-1 2009 Grand-Prix, getting kicked by Semmy is like packing the entire universe inside of a shotgun and aiming it directly at your head. Getting hit with the kitchen sink is an understatement. The dude is a seven-time K-1 champion. In comparison, Michael Jordan only has six rings. Of course, that’s six more NBA championships than you or I will ever legally possess.

When the rumors manifested earlier today of Semmy Schilt potentially be closer to re-signing with UFC, it didn’t seem that unreasonable. Just last month, Semmy told Ariel Helwani that he has not ruled out a UFC return after the K-1 Grand-Prix this year. In fact, the last time we witnessed Semmy Schilt inside an octagon was at UFC 32 against Josh Barnett. Unfortunately, Semmy lost in the first round due to a slick armbar from the Baby Faced Assassin. Nine months later, Josh Barnett defeated Randy Couture to grab the UFC heavyweight belt only to be stripped of the title after testing positive to a banned substance days later.

MixFight.nl broke the news with a statement apparently made from Golden Glory that talks with Dana White had already begun and a three-fight contract seemed likely for Semmy. MMABay.co.uk abruptly picked up the news, followed by Fighters Only Magazine and then a virtual potpourri of other MMA sites. Head Kick Legend decided to contact Golden Glory to see what Bas Boon had to say about the rumors and the site was met with one simple statement: ‘It’s total [expletive]‘.

The entire thing was a farce. There hasn’t been a single meeting or negotiation between the two parties. Boon admitted they are in good terms with the Dana White, but Semmy Schilt is not going to the UFC. However Bas Boon did say that Jon Olav Einemo was the only Golden Glory fighter that may step inside of an octagon, and that is like seven layers of amazing.

A few years ago, people were saying that the only guy that could beat Fedor was Einemo. Dude’s first five fights were finished early in the first round and all of them came via submission. When he finally arrived in Pride in 2006 (after a three year layoff), he was matched against Fabricio Werdum whose only loss was a controversial decision with Sergei Kharitonov (another dude that I would love to see fight on American soil). Einemo eventually lost a decision in his Pride debut and decided to leave the organization a few weeks later. Nine months later, Einemo fought James Thompson in Belgium, won via armbar and then abruptly disappeared from the MMA world. Props to Golden Glory for finally nagging Einemo long enough to return to the world of mixed martial arts, we all missed you. [Source]