Sean O’Malley Claims He Was Joking About His Support For Dana White: ‘It’s The Kind Of Humor That We Like’

Sean O'Malley Is Unhappy With The Headlines Regarding His Reaction To Dana White Slapping His Wife.

Sean O’Malley has responded to misleading headlines about his opinion on a recent controversial topic.

The video of UFC president Dana White slapping his wife exposed some people who believe White was justified in the violent action. O’Malley was mistakingly classified as one of those people after his comments on the BroMalley show, leading to disturbing headlines.

Before the situation escalated, O’Malley cleared the air on his other podcast, the TimboSugarShow. He had this to say:

“Dude, it was every journalism, or journalist, whatever f**ing site. It wasn’t just them (MMA Junkie). MMA Junkie definitely sucks, but they got it in the comments… In the whole video, I was like, dark humor, making jokes on a bunch of bad s**t. 95% (of what we say is f*cking around)…”

O’Malley continued to explain by saying:

“It’s the kind of humor that we like, unfortunately. You look at our f**king group chat, I’ll go to hell. But dude, Joe Rogan says the same thing. I’ve heard celebrities say the same thing. It’s like, it’s the most f**ked up s**t that makes you giggle.” h/t MMANews

‘Sugar’ didn’t openly condemn White for the domestic violence, but his frustration with the headlines suggests he disapproves. The UFC bantamweight also responded directly to MMA Junkie on Twitter when their article about his comments was posted.

Sean O’Malley wasn’t happy with the way he was portrayed in headlines. Although the quote was correct, O’Malley believes the media should have watched the entire video to see that he was joking. MMA Junkie posted his original comments with the headline:

“Sean O’Malley: Dana White’s wife deserved to be slapped back”

O’Malley likely didn’t realize he said something controversial until the headlines were made. He responded to MMA Junkie’s article on Twitter by commenting:

O’Malley is not in the business of bad publicity. After defeating Petr Yan in his last fight, the 28-year-old became the number one bantamweight contender. He plans to fight the winner of Aljamain Sterling vs. Henry Cejudo for the UFC 135-pound title next time out. 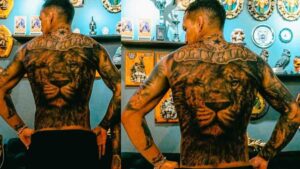