Satoshi Ishii vs. Minowaman is slated for Dream 16 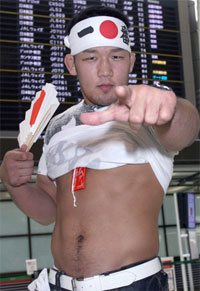 Japan finally has another heavyweight besides Fujita, Yoshida and Yusuke Kawaguchi (am I missing any…nah, didn’t think so). Satoshi Ishii ‘rocked out with his judo gi out’ two years ago at the 2008 Beijing Olympics grabbing a gold medal in the Men’s +100 kg. Even back then, the entire MMA world was flipping out by how eloquent this dude disposed of competition. After snatching the gold, Ishii announced that he wanted to try his ‘head-first slamming abilities’ in mixed martial arts and started by challenging Fedor to an MMA bout. The guy’s at FEG approached him to sign on a Dream card early in 2009. Satoshi Ishii essentially said, ‘screw it’, rejected their offer and moved out to the US to train with American Top Team. When that was over, dude moved to Brazil to train with Lyoto Machida. Satoshi eventually had his fill of Brazilian steaks, signed with Sengoku (after negotiations with UFC fell through) and spent a few months rolling around at Xtreme Couture in Las Vegas (and probably breaking some coffee tables in the process).

Ishii made his MMA debut at Dynamite!! 2009 against Hidehiko Yoshida, the proverbial match between ‘new hotness’ and ‘old and busted’. Everyone remembers how Satoshi Ishii was a lock to beat Yoshida. That notion came to an abrupt halt when the entire MMA world realized that the bout wasn’t just 1992 vs. 2008 Olympic Judo gold medalist, but a dude that had an MMA record of 9-7-1 (with wins over Mark Hunt, Royce Gracie and Don Frye) versus a guy who was 0-0. Despite being the ‘underdog’, Yoshida grabbed the unanimous decision over Satoshi Ishii.

Satoshi didn’t get the win in his first MMA bout, but he did win his second fight…sort of. Back in March, Satoshii Ishii grabbed his first win over Sasae Paogofie at X-1 in Hawaii. Unfortunately, for reasons that are entirely too complicated for any of us to discern, the bout was changed from ‘professional’ to ‘exhibition’ at the last minute. That meant even though Ishii grabbed his first win in MMA, dude was still 0-1. What an absolute statistical letdown.

On May 15th, Ishii finally grabbed his first professional win when he armbared Tafa Misipati at 2:42 into the first round in Auckland, New Zealand (a country I nearly became a citizen of if it weren’t for my blatant lack of respect for the New Zealand immigration department). On June 10th, Satoshi Ishii fought Myles Tynanes at X-1 and refused to stop punching his opponent despite the referee jumping in the middle of the beating. This earned him his first official disqualification and subsequently the status of ‘that guy who punches after the bell’ in Hawaii.

Since his first professional MMA win, Satoshi Ishii temporarily moved to Los Angeles to train with the magicians at Blackhouse (which include Anderson Silva, Jose Aldo, Junior Dos Santos, Lyoto Machida, Big Nog, Feijão…I could do this all day). According to Japan’s Sponichi Annex, Satoshi Ishii returned from Los Angeles essentially begging FEG to put him on the Dream 16 card and it looks like he will have his wish. Satoshi Ishii will be fighting against the only guy in MMA that could properly pull off wearing red Speedos: 2009 Superhulk Champion, Minowaman. According to the report, the fight will officially be announced today, just three days before Dream 16. It also appears that Ishii was slated to compete in SRC 14 (which would have been the final fight of his Sengoku contract) but was unable to come to a financial agreement. Still no word on whether Ishii decided to surf with Phil Baroni on his recent trip to the US. Big thanks to TokyoDrifter for the tip. [Source]