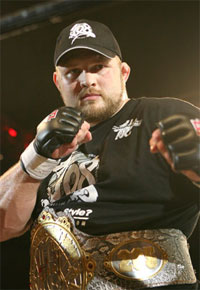 Of all the fat jokes that could be thrown in Roy Nelson’s general direction, the dude is the former IFL heavyweight champion and has gone undefeated in the UFC with two cranium exploding knockouts. On top of the rawesomeness that is Nelson’s overhand right, dude has a BJJ blackbelt under Renzo Gracie.  Combine that with his fully developed mullet, awkward fashion sense and his extreme fascination with Weird Al Yankovinc and the dude could easily be one of those hipsters that are indigenous to Silverlake. In an interview with Tapout Radio, Roy Nelson proclaimed that in his upcoming UFC 113 fight, Kimbo Slice has the edge over Matt Mitrione on the ground.

“Matt has quick hands, Kimbo has power in his hands. It’s going to be a fun fight to watch…I think Kimbo probably edges him out on the ground though.”

“You heard it from Roy Nelson, Kimbo edges Matt Mitrione on the ground. I hate to say it but that’s just the truth.”

Bet you never thought you would hear those words on Easter Sunday. Now excuse me while I hide plastic eggs around my apartment and then front like I don’t know where they are an hour later. [Source]