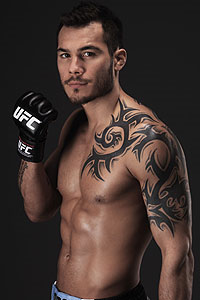 Contract demands are a lot like high-class prostitutes. What you get is generally very attractive, and it’ll probably provide you with an entertaining evening’s worth of memories. You can even try to bargain and/or budge on the price but once you give in, you somehow understand where all that money went. Other times, you settle for less and end up with an STD cocktail that leaves you with more prescription medication than Paulo Filho’s psychiatrist can name off the top of his head in 30 seconds. For everyone’s sake, I hope Roger Huerta made the right choices when he was out in Thailand.

Even if he didn’t, it looks like Roger might have more than enough ‘milk money’ to cover any/all prescriptions he’ll need in the coming years. According to MMApayout.com, it looks like Roger’s Contract demands included a $250,000 signing bonus in addition to other undisclosed perks. For months, the world of MMA expected Scott Coker to jump on Roger’s free-agency the same way I attack a plate of tacos but in the end, it was Bellator that promised the Spanish-American the better offer and more opportunities to fight. Taking into account the considerable Latino following Bellator currently boasts, this signing makes sense, and Roger has long been considered a favorite amongst fighters and fans alike.

Don’t worry ladies. Roger Huerta doesn’t have any STD’s that we’re aware of. We merely wanted to point out that it’s possible to bring up Paulo Filho several times per day and you’ll continue to entertain his dependency on anti-depression meds as though it’s the first time, every time. Dyslexia FTW! [Source]