Rizin: Sakura – Live from Yokohama, Japan – What to Expect from Japan’s #1 Promotion

Unless you’ve been living under a rock the size of Mount Fuji, you’re aware that the beating heart of Pride Fighting lives on with the new Japanese promotion Rizin Fighting Federation. This weekend they are having their fifth event in Yokohama, Japan, entitled Rizin: Sakura.  For those uninitiated with Japanese culture, sakura is Japanese for cherry blossom, and as the cherry blossom trees bloom this time of the year, Pride has decided to give us this spectacular poster: 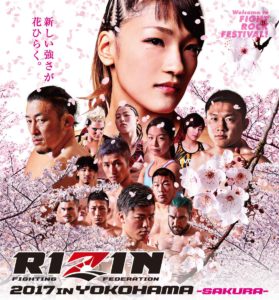 But what is on the card that’s worth staying up for to 2 am EST start time?

Well for starters, former Pride fighter Tatsuya Kawajiri is fighting Tucson, Arizona’s Anthony Birchak. Kawajiri is rebounding off his lose to Kron Gracie (AKA Kron Greezy) and at 38 years of age it might be the final fight for this star of Japanese MMA.

Some part of my broken brain loves the fact that Kawajiri’s last win of his career could be Jason “Hick Diaz” Knight. That seems to settle well with me cosmically. Also, the way Rizin is marketing Anthony Birchak is just awesome.

As soon as any anonymous UFC fighter goes to Rizin, they immediately explode in personality, proving that the UFC does not understand MMA. The tongue-wagging, tattooed, crazed American gimmick is an instant win on both sides of the Pacific.

Beyond the main event, we have some other delightful oddities that only Japanese MMA can provide. The baddest flyweight in the world not named Demetrious Johnson, Kyoji Horiguchi is fighting some no name guy.  Classic Pride move.  Japanese Female Kickboxing sensation, Rena! (the exclamation point is necessary) will probably head kick someone. So we can can look forward to some awesome showcase fights that will probably end in horrific knock out.

But even better, Rizin is getting involved in its own Legends Division with a heavyweight clash between Waco, Texas’s own Heath Herring, fighting in his second fight for Rizin, against Satoshi Ishii. These are the type of fights you make in a Legends Division. If you don’t know, one time Heath Herring did this:

Which basically makes you a legend forever in Japan. Heath Herring don’t play that gmae. I just hope he chooses to dye his hair a light pink this event to match the Cherry Blossom theme.

Rizin is also starting to build up the team concept again (shout to Team Hammer House) as last event, Heath Herring introduced Jazzy Gabert to the organization. Jazzy “Alpha Female” Gabert is debuting for Rizin against King Reina. “Alpha Female” has made no bones about it; she is the only person on the planet Earth brave enough to challenge Gabi Garcia.

And finally, there is Daron Cruickshank.  To say Rizin has reinvigorated Cruickshank’s career, would be a massive understatement.  Don’t believe me?  I present my entire argument in two tweets:

just had a new security system put in my home. comes with a camera. What do you guys thing of where I put it lol pic.twitter.com/pFsTqu9wkl

Where was this guy all those years in the UFC? Let’s just hope that he shows up with those sweet American shorts again. Nothing screams fighting in Japan quite like a guy wearing USA shorts to the ring, escorted by a dozen scantily clad women.

Alright, here’s the bad news. Rizin isn’t free anymore. Sakakibara is coming for those US dollars. So, dig into that old Paypal account and try to find $14.99 to enjoy the festivities over at Rizin.