Report: KSW may have finally found an opponent for our fav fighter Martyn Ford

Please Fight Gods, let this report be real. We won’t ask for anything for the remainder of 2018 if you give us Martyn Ford vs. Iranian Hulk inside a KSW cage. This is the fight MMA wants and MiddleEasy deserves.

For Christ sake his name is the Iranian Hulk, it is Martyn Ford’s destiny for his first opponent to have Hulk, Thing, Thor, Beast or Galactus somewhere in his legal name. Remember last month? When we said KSW was just emulating Pride FC but it may have surpassed it?

This is the shit we were talking about. KSW is making MiddleEasy looking smart by proxy? Bless you KSW for finding the 6’8 280 pound Ford and bless you for traveling to Iran to find a Hulk.

“The unmistakable size of Martyn Ford (over 2 meters tall and 160 kg weight), whose contracting announced KSW at his London gala in October, probably won a worthy opponent. He is supposed to be an Iranian, Sajad Gharibi , whose height and figure seem to predestine him almost perfectly to the pseudonyms he uses: the Iranian Hulk and the Persian Hercules . With a height of 186 centimeters, this man weighs over 190 kg!”

“Gharibi is struggling with lifting weights, but martial arts are not so foreign to him – he was wrestling. Perhaps that’s why he mentioned in the past that he dreams about a career in WWE.

Meanwhile, however, as declared by fightbible.net , the Iranian envied Ford for contract with KSW and said that he too could successfully find himself in the MMA formula.

“The promoter has already signed a contract with both parties that agreed to a duel, but no final terms have been set yet.”” 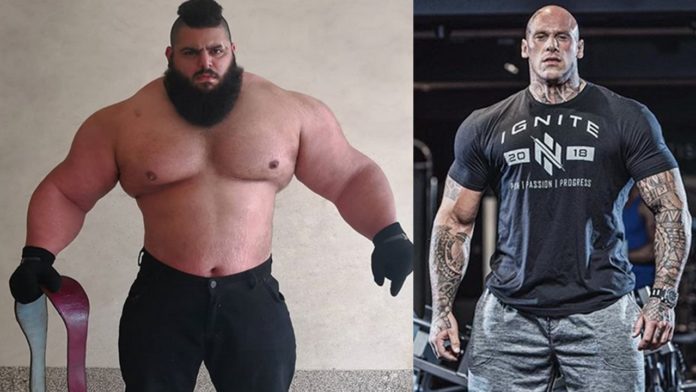 BAH GAWD. So much beef in one KSW cage

Your favorite MMA promotion is too scared to book the fights fans really want. pic.twitter.com/tpKIu8UdrW

Yes, this fight is so good we’re not even ashamed that we embedded our own tweet into the story. No shame, all beef, coming to a KSW cage near you.