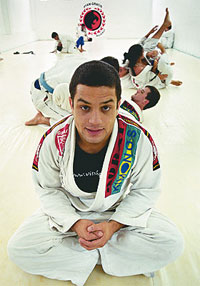 If Renzo Gracie ever wrote an autobiography, I would sacrifice a small mammal just to get my hands on it. Nothing as big as a Labrador retriever. PETA wouldn’t really dig that. I’m thinking something roughly the same size as a Chipotle Burrito. I could handle that.

In an interview with Tapout Radio last night, Renzo Gracie opened up about his late brother, Ryan Gracie, and makes it abundantly clear that regardless of how cool you think you are…Ryan Gracie was light-years ahead of you and he did it like an absolute rockstar.

“What people don’t understand is that Ryan was a very special guy to a very few people. Not many people could say that they were his friend. It’s the difference between having a cat and a tiger. It’s like for sure you’re going to worship 10x more the friendship of a tiger because he could eat you at any time. Most people choose to be friends with pussycats. Even though he died at 33 years of age…you have to understand. A man’s life is not measured by time he lives. It’s measured by the intensity that he lived. I could sit here and tell you ten hours of stories than I know of Ryan. You have to understand, he never let the best stories get to me because I was like his father figure so all of the stories would get to me in small doses.”

“The other day I opened a Brazilian Playboy Magazine and they had a selection of all the covers, I saw five girls there that he dated. All the women he ever wanted, he found out a way to get with them. Every person that he loved, he told them that he loved them and every person that he had a chance to fight, he did it. When he died, he was 150 years old. I’m 42 right now and I won’t be able to live as much as he did.”

In the interview, Evan Shoman from Tapout Radio managed to pry a Ryan Gracie story out of Renzo.

“There was one story that took me 30 days to learn the story because I would only hear it in parts. Each part was told by a different person. It was a crazy night where he was arrested twice in one night and he was so lucky that as the cops arrested him they had an emergency call and they kicked him out of the car, twice.”

For those of you who are unfamiliar with the legend that is Ryan Gracie, you just need to take a look at how the dude died to really understand just how intense he lived. On a Friday night in 2007, Ryan Gracie was arrested for stealing a car from a man at knife point, crashing the car and then charged with stealing a motorcycle to evade the police. The next morning, Ryan Gracie was found dead in his prison cell in Sao Paulo from an apparent heart attack. The actual cause of his death is still somewhat unknown. Police found trace amounts of cocaine and marijuana in his blood but nothing to warrant an overdose. It’s rumored that a psychiatrist visited Ryan in his cell and accidentally gave him a lethal mixture of pharmaceuticals to calm him down. Regardless, Ryan Gracie is an absolute legend and hopefully Renzo will write a book that will be entirely made up of an uninterrupted flow of Ryan Gracie stories that you can tell your grand-kids at night. [Source]