UFC 224 PPV event went down Saturday night (May 12, 2018) from Jeunesse Arena in Rio de Janeiro, Brazil. The event was headlined by UFC bantamweight title fight between Amanda Nunes and Raquel Pennington. Nunes defended her title for the third consecutive time, defeating Pennington via fifth-round TKO. The co-main saw middleweight Kelvin Gastelum clashed with #3 Ronaldo Souza. Jacare got some success in the opening round, with Gastelum getting back into the fight in the second. In the last round, Gastelum earns a hard-fought decision victory.

Coaches should throw that towel…sad

Nunes: This was my hardest fight because I like these girls [Rocky & Tecia] so much. But when it comes to defending my belt, I have to do it. But we're going to go out and have a beer and celebrate our friendship.

I don’t know… it’s not always about winning the fight. Sometimes it’s literally only about not quitting. Sometimes that IS the fight.
I’m not saying it’s right, I’m just saying that there’s a LOT of regret associated with quitting… those are moments you never get back.

They should have never let her go into the 5th round like that.

Coaches should throw that towel…sad

Perfect example why you shouldn’t let a fighter continue if THEY say they’re done. #UFCRio

Raquel’s team most definitely knows how tough she is given all she’s been through with her injuries that have kept her out of the octagon.

For them to send her out for the 5th round when she says she’s done is complete negligence on their part and selfish as fuck.

Really feel bad for her. They’re meant to save her from punishment like that.. not send her out for more.

Defensively, I see clear holes that future opponents (and Rocky) can capitalize on against Nunes. When ppl push FWD, Nunes tends to push her hands out while backing up. She’s getting away with it by moving away from the power, along with footwork. Pay attention. #UFC224

@Amanda_Leoa is a savage Low Kick!

What a fight!!! #ufc224 @KelvinGastelum is a beast

When in doubt, say fuck it and jump for the heel hook! Somewhere Jason Rau is proud of that attempt. #SerraBJJBlackBelt #UFC224

@KelvinGastelum is like a modern day @danhendo. You can’t make him bleed. Can’t hurt him. @ufc #UFCRio #beast

What a fight. @JacareMMA and @KelvinGastelum definitely is was split for either side.

@KelvinGastelum is the next champ

A split decision that doesn’t go to a Brazilian… in Brazil!? pic.twitter.com/uS1k22HUu7

How does Kelvin not even look like he’s been hit? I get jabbed once and I’m bleeding everywhere. Great fight. #UFC225

@KelvinGastelum is a fuckN beast

Damn Dern lands that bomb then chokes her out.. woulda been better had she not missed weight by 7lbs tho #UFC224

Seven pounds is close to a full weight class difference and indicates that she basically didn't even bother to cut, while her opponent was a pro and cut all the weight. So, yeah, it's a huge difference and advantage. #ufc224 https://t.co/2Ppl2Tqgqd

How can you not like @johnlineker dude comes to SCRAP every time! #ufc224 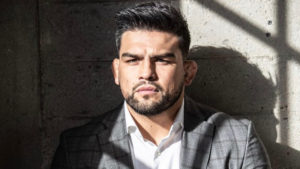 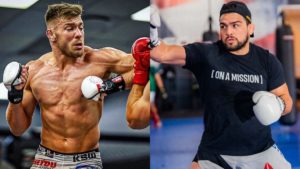 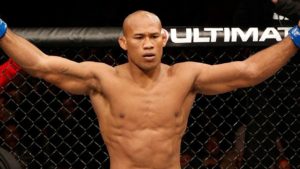 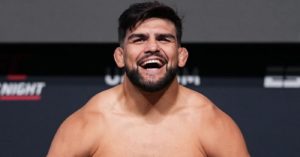 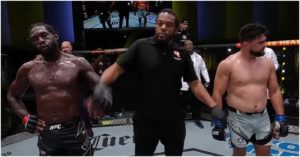 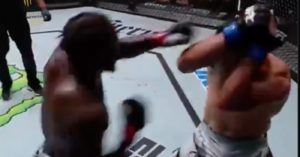