Paulo Costa won Yoel Romero in the main card of UFC 241 via decision. But the Brazilian striker suffered a biceps injury and he is sidelined at the moment. He might be out of the UFC until mid-2020.

Israel Adesanya, who became the division champ after his KO win over Robert Whittaker in the main event of UFC 243, and Paulo Costa have already gone back and forth on social media in the past.

But this time, the Brazilian went one step further and attacked Adesanya with some racist comments, which were already deleted. Take a look at the picture below.

“Adesanya is afraid, into himself knows. He try looks good but everybody so skinny and fragile as him fell afraid to fight against powerful guys. P***y African!” 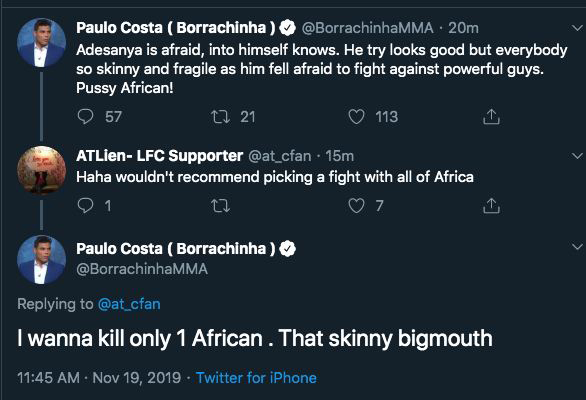 The fan criticized him for his words, but Costa continued.

“I wanna kill only 1 African . That skinny bigmouth”

Yoel Romero might get a next title shot. Paulo Costa is probably angry because of his injury, but racist comments are everything but a good way to trash the opponent.

What are your comments on Costa’s insulting words? Will Dana White react?

Douglas Lima Would 'For Sure' Knock Out Kamaru Usman
Read Next Post →
Click here to cancel reply.