Part One: The story of Comedian and MMA writer Dan LaMorte’s journey in Fat to Fit to Fighter

Have I given up? I don’t know. What I do know is that I’m a hundred pounds heavier than I was 3 years ago as a college baseball player, a career that came to an end in my Freshman year due to a torn UCL and an unsuccessful Tommy John Surgery. I also know that I just ordered a dinner sized chicken parm dish for lunch, the difference in the lunch portion and dinner portion? An extra piece of chicken, a side of a rigatoni, and a loaf of bread. All of which will be consumed in one sitting.

I know you’re all saying, “What happened in those three years to make you go from 180 pounds to 288 pounds?” The answer is simple; I became a comedian, and a decent one at that. I’ve traveled nationally and soon internationally doing comedy, I’ve been on TV a handful of times, and have my first album coming out January 29th…all of this from ages 19-21. Despite minor success, I still struggle not only financially but also mentally. I am the proud owner of a mind riddled with bipolar disorder, major depressive disorder, and anxiety disorder. A lack of money and a plethora of mental illness may be a petty thing to blame obesity on, but it is all I have to blame minus myself and to be honest I am too narcissistic to do so.

Now, you’re two paragraphs in and still are unsure what this article is about. Let me change that, with the New Year will come new change (realistically for most it won’t, but people love saying that). I’ve been a member of the same gym since middle school, so this isn’t about lifting heavy weights and getting so big that I crush the microphone when I get on stage. This is about becoming a fighter.

Yes, I’ll give you a minute or two to recover from the laughter your lungs are probably filled with at this moment. I will repeat it to show I’m serious, this is about me becoming a fighter.

I’ve lifted heavy weights, I’ve ran many miles, but not once have I ever fought in an organized MMA fight. Being an MMA writer and fan, I feel it is a disservice to both myself and those who follow me that I have no real training or experience. This all changes January 1st.

With the help of my friend Frank Wells and a great gym in The Institute Muay Thai, I am taking the steps needed to learn the art, study the art, apply the art, and eventually practice the art competitively. Frank, weirdly enough my “ex-girlfriends ex-boyfriend”, has already been a huge help in this process. He is the first titleholder from The Institute Muay Thai and is about to be their first “home grown” pro fighter as well. He introduced me to owner and Coach Mike Burke, who is happy to have me join the team and work with me on this journey as long as I bring all the effort and heart I have.

The Institute moves into its new location in Keansburg, New Jersey January 1st and is open to the public on February 1st. I myself will start training with the team January 1st, because I am committing to this from day one of 2017.

A 288 pound former college athlete turned comedian who wants to fight mixed martial arts, while training with his “ex-girlfriend’s ex-boyfriend”, frankly sounds insane. To give you an idea of my current athletic ability, two weeks ago I partially tore my meniscus playing flag football. I have more stretch marks than Octomom and a body that looks like garbage bag full of Jello when I’m in a tight shirt.

Lastly, it’s not only about physical changes but mental changes as well. This will be a journey filled with many ups and downs, humorous moments, dark moments, and hopefully multiple success stories. But more importantly, a journey that is fun to follow. I may crash and burn, get hurt, or get beat up but honestly, who doesn’t love watching a fat guy fall down? Anyway, I have a loaf of bread to finish (the chicken parm is long gone by this point) so please stay tuned for updates, videos, and more articles. Wish me luck! 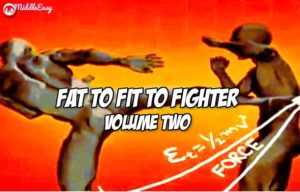