Hey folks, Dan LaMorte here or as some of you now know me; that crazy comedian who is trying to train to become a fighter. If you read part one of “Fat to Fit to Fighter” you would know my backstory. College athlete, career ending injury, became a comedian, became out of shape, blah blah blah. January 1st I set out to change that by signing up for The Institute Muay Thai, a Muay Thai gym in Keansburg, New Jersey that opens to the public the first weekend of February.

These guys have been training and fighting under owner Mike Burke for years now, but this is finally their own place…their own gym.

I got in on the ground level, quite literally. My first morning there was January 1st. I rolled in at ten in the morning. The new location is a former party hall, their last party you ask? December 31st. That’s right. I literally started on day one of this gym, before it was even a gym. We rolled the tables away, stacked the chairs, did some demolition work, put down mats, and started training.

Seeing as the gym is not open to the public yet, I am training with their fight team; a mix of amateurs, professionals, and soon to be professionals. Having a minimal amount of knowledge in boxing means I am not totally clueless. But if you were to ask a bystander to point out the least experienced fighter there, they shouldn’t have too much of a problem doing so.

From a physical standpoint, in the first week, I took part in three training sessions with team members and one personal lesson with owner Mike Burke. I’ve done mostly pad work, bag work, and basic technique work. I messed around with the Muay Thai clinch one day, but quickly found that as of now, those skills are not in my arsenal.

I’ve changed my diet completely (minus that one day it snowed 7 inches and my girlfriend and I decided Pizza Hut was a much more viable option than risking our lives to eat healthy) and I’ve seen some obvious changes. First of all, from a purely weight standpoint, after a week I was down to 279 pounds. If you recall I started at 288 pounds, so I lost nine pounds in week one…not too shabby.

Also, I was coming off a partially torn meniscus and after a week of stretching, kicking, and kneeing, I am happy to say my meniscus no longer feels like it belongs in an 80 year old’s body.

This was a week dedicated to fight training. I didn’t do standup, didn’t write comedy, etc. I only focused on training.

Now, it’s time to introduce my normal life of performing and writing into the life of training. It’s going to be a hard balance, especially because I am one of the laziest people I know. I need to write a new hour of standup because my old hour is being released January 31st in the form of my debut album “Not Enough Pieces” (courtesy of On Tour Records). It’ll be available on iTunes and whatever else kids are listening to shit on these days. The point is, I need a new hour of material. I need to keep performing. I need to keep training. And I need to stay sane (for the most part).

I publicly decided to say I wanted to fight at least one fight and train for a year to do so, and I am man enough to admit that was an insane thing to say. However, I am a man of my word, so I am sticking to this. Till next time folks! 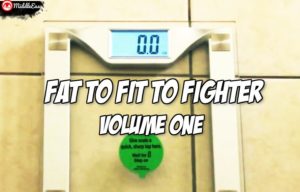 Part One: The story of Comedian and MMA writer Dan LaMorte’s journey in Fat to Fit to Fighter