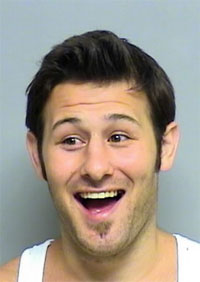 We told you guys in January that you should build a shrine to Beau Taylor aka ‘OMA ™’ (One Man Army – Trademarked) but for some reason you didn’t listen us. Now hopefully this video of OMA interviewing James Toney will get you started on constructing your ashram.

OMA is the same guy who, in the summer of 2009, told TMZ that UFC legend Kimo Leopoldo died of a heart attack in his home in Southern California. Within a few hours, reports of Leopoldo’s death traveled across the world including the front page of the LA Times. Kimo’s publicist phoned him to ensure that he was alive and Leopoldo allegedly told his publicist to inform the media that ‘He wasn’t dead, just sleeping‘. The next day, TheSmokingGun discovered that within a few days leading up to OMA’s ‘Kimo Death Hoax’, he was discovered by the Tulsa Police Department in a shopping mall parking lot passed out on his car console with open bottles of alcohol littered on his passenger seat. Prior to OMA’s mugshot, he insisted that he didn’t want to look like Nick Nolte and chose to smile while looking to his right, a pose that should never be duplicated in any capacity from now until the sun kills the earth.

Somehow, in the infinite possibilities of this universe we live in, OMA secured an interview with UFC’s James Toney to discuss what he plans on doing in his upcoming bout with Randy Couture. It’s a must see. [Source]