If you’ve been around the international fight game for a while, you are familiar with the name Ole Laursen. Laursen is a fighter who made his professional debut in 2000 as a Kickboxer, and in the span of eight years as a Kickboxer posted an impressive record of 34-19. Considering the level of talent that he was pushed into fighting, it is very impressive to see what Laursen has achieved in his career so far. This weekend, Laursen makes his One FC debut at Lightweight against the Swiss Felipe Enomoto in one of the featured bouts of the evening.

Laursen’s career in Kickboxing and Muay Thai sets him up as an early favorite going into this bout, with Laursen’s career including experience fighting for K-1 MAX and Shoot Boxing, fighting some of the very top fighters in the world. There is no shame in saying that you have stood toe-to-toe with Duane “Bang” Ludwig, Andy Souwer, Hiroki Shishido, Gago Drago, Buakaw Por. Pramuk and Masato. In the world of Kickboxing, that is a murderer’s row and Laursen held his ground against those names. 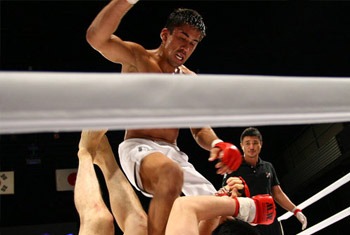 Through his contract with K-1, he was pushed into the world of MMA in 2006 and was immediately pushed into some of the deepest waters imaginable, taking the legendary Genki Sudo to a decision and then two months later having to step into the ring with a hardened veteran in Caol Uno. Those two early losses helped form a resolve in Laursen, who has since been on a five fight tear through the Asian Lightweight scene, leading to his signing with One FC. It is safe to say when he squares off against Felipe Enomoto that the bright lights and the international attention that One FC brings won’t be too distracting for him after fighting some of the best fighters in the world in many exotic locales

So, while Laursen is coming into this bout as the seasoned veteran who has seen and done it all in the fight world, Felipe Enomoto is bringing to the ring a 5-3-1 record that spans all of Europe and Asia as he also makes his One FC debut. Enomoto is looking to shake off a two-fight slide that he is on, but will do so in one of his biggest challenges in his blossoming career in Laursen. Laursen provides an interesting challenge for Enomoto, who has been training in a more well-rounded style for longer, with his base in MMA being brazilian jiu-jitsu before tackling Muay Thai.

Enomoto’s biggest challenge to date was against the well-seasoned veteran of UFC, Bellator, Hero*s, DREAM and yes, even ZST, Rich Clementi. It was a tough loss for Enomoto who had problems with Clementi standing up and was more or less stifled on the ground by Clementi, which is no shame to a guy with 25 submissions to his resume. Enomoto will not see the same sort of resistance or unified ground game from Laursen, and if he is able to get the fight to the ground, should be able to dictate the pace of the fight and bring Laursen into his fight.

This being said, Enomoto is not afraid to exchange on his feet, but against a seasoned striker like Laursen he’ll have to really bring the fireworks while avoiding getting hit. Both fighters bring a unique skill set to the One FC ring and could be a major asset in the Lightweight division.