The ‘Fedor Chronicles’ continue to confuse the hell out of everyone that have been sucked into it’s vortex. Here’s a brief summary for all of those who have yet to be engulfed in it’s nonsense: Fedor signed a contract with Affliction that lasted until 2011, Affliction collapses, M-1 Global scrambles to find Fedor another organization to inhabit, They talk to UFC and are offered a $30,000,000 contract but they turn it down due to lack of co-promotion with M-1 Global, Fedor’s camp says they actually never had a contract with Affliction, Strikeforce and CBS offers Fedor $1,000,000 per fight and now Sengoku has threw a bid to get The Last Emperor inside the Saitama Super Arena.

Courting Fedor has been synonmous to a group of drunk guys trying to get a chick’s phone number at Hooter’s on a Friday night. Sure they promise her the world (the hot chick being Fedor…imagine that) but without a co-promotion from M-1 Global, you could take that $12 Jaggerbomb you just bought her and…well, give it to me. I’ll take it.

The only two heavyweights in Sengoku that could break a sweat on Fedor are Antonio ‘Bigfoot’ Silva and the anabolic steroid hero himself Josh Barnett. So maybe we will see that Affliction Trilogy match up that was promised to us but instead, Barnett wanted to finish reading his comic books. [Source] 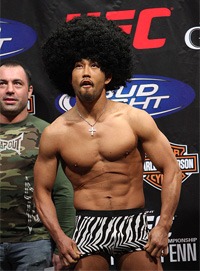