Nick Diaz laughs at your attempt to organize a conference call 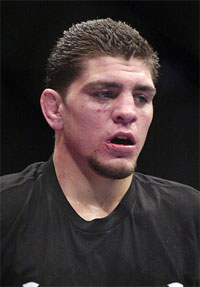 Strikeforce had a conference call for Diaz vs Noons II yesterday and although it went down, it did so without Nick Diaz. Only KJ Noons was available for questions from the media. Why, you might ask? Well, Nick Diaz is just too hardcore for conference calls. He sends in his manager and trainer, Cesar Gracie, to do it for him and KJ Noons wasn’t particularly thrilled.

Cesar Gracie: “Nick doesn’t really do the conference call with the guy he’s fighting thing,” he said. “He just never has. It’s just not in his psyche. He’s too busy training to be on the phone and everything like that right now.”, said Gracie. “He just doesn’t operate in that mindset of, ‘This is a sport, and we’re going to talk about it.’ It gets to the point where you’re making up some kind of rivalry, and it’s a fake thing. With Nick, it’s not a fake thing. He’s been busy fighting, and he has bad blood for everybody who steps in cage with him. That’s how the Diaz brothers are. Their mindset is that they’re going into battle, and you wouldn’t fight a friend. That’s what makes Nick exciting.”

KJ Noons: “That’s pretty unprofessional. Like I said I can’t stand the guy, but I like to watch the guy fight. I like to watch his brother fight. From different people, I’ve heard he’s a really nice guy. I believe I’m a nice guy . . . but when he pulls [expletive] like this, doesn’t show up on a conference call, it’s hard to like a guy like that. Or he punks off. Or he gets your family involved and [expletive] like that.”

Noons sounds like he is still pretty heated at Diaz for calling his father a drunk and saying he should watch his son’s fights from home. According to Gracie, Diaz’s beef with Noons isn’t personal. He’s just ‘keeping it real’. Whether or not these two squash their beef in San Jose on Oct 9th, depends on Diaz. According to Noons, “the ball is in his court”. I don’t know if the beef will subside, but I can assure you we will see the phrase ‘don’t be scared homie’ for at least three or four weeks after the hood-style war goes down in the 408. [Source] 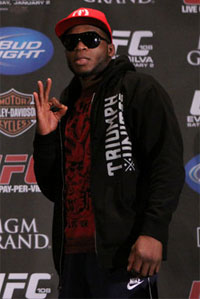 Paul Daley vs. Scott Smith is going down this December in Strikeforce
Read Next Post →
Click here to cancel reply.