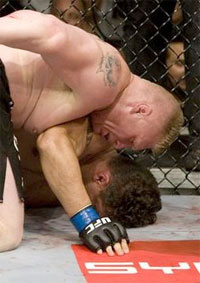 Reilly is considering introducing a compromise bill that would legalize the sport while requiring it to be less violent, perhaps by making it illegal for a fighter to hit an opponent when he’s down and limiting the use of elbows.

“That’s just one of my strategies,” said Reilly, who has received calls from mixed-martial arts opponents in several states as well as Canada and England seeking his advice on scuttling the legislation.

Although the bill has not been taken up in the state Senate, Reilly said he plans to contact Gov. David Paterson and argue that it’s a bad idea despite the state’s economic woes. “This sport is so violent it’s no way to raise revenues,” Reilly said.

It seems like everyone I know whose name begins with ‘B’ and ends with ‘Reilly’ seems to be a pseduo-politician that is completely out of touch with…everything. Dude is the main opponent in legalizing MMA and today he will verbally bang against Gov. David Paterson to push his agenda on making strikes to a downed opponent illegal. [Source]

This is why you should love Tom Lawlor
← Read Last Post