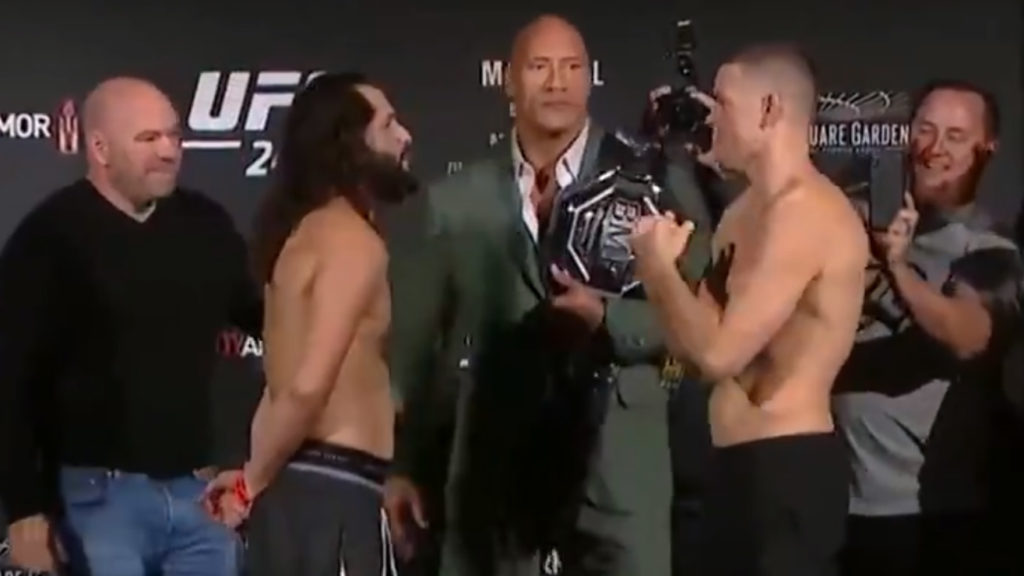 Masvidal Faces Off With Nate Diaz At UFC 244 Weigh-Ins

UFC 244: “Masvidal vs. Diaz” (PPV) event is just around the corner, which takes place tomorrow night (Sat., Nov. 2, 2019) from inside the Madison Square Garden in New York City.

After tipping the scale, welterweights Nate Diaz and Jorge Masvidal faces-off. The pair will fight for BMF (Baddest Mother F**ker) title. The winner will take the belt and WWE superstar and famed actor ‘The Rock’ Dwayne Johnson will ultimately present that award. Johnson was also in attendance at weigh-ins.

The former middleweight title contender, Kelvin Gastelum, will clash against Darren Till came to face off. Derrick Lewis and Johnny Walker were also present at the action.

Check out the staredown video below:

TWO BMFs. ONE BELT. FROM THE MECCA! 🗽⁰

Odds this goes 3️⃣ rounds!? SLIM!@KelvinGastelum welcomes @DarrenTill2 to the MW division under the bright lights of NYC! 🏙

The Beast is unleashed! 😤⁰@TheBeast_UFC returns against Ivanov in MSG! #UFC244 pic.twitter.com/LZXsJDlhAC

Pure excitement in this one! ⚡️⁰