Nate Marquardt is disappointed he has to fight Chael Sonnen 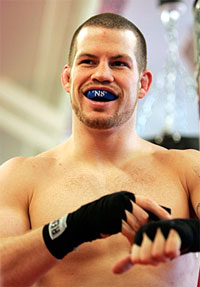 I think we all have exceeded our amount of Chael Sonnen quotes for the week. In an interview yesterday with Steve Cofield, Sonnen insists that Anderson Silva refuses to speak English and whenever he’s in front of the camera it’s ‘Se Habla Espanol’. Yeah we could sit here and tell you that Se Habla Espanol is Spanish and Anderson Silva is Brazilian and speaks Portuguese…but that would just take the fun right out of it. You may be a little disappointed, but so is Nate Marquardt. Here’s what he said in an interview regarding his UFC 109 bout with Chael Sonnen.

“I was actually even disappointed when they offered me Chael… He is not as well known as me… But at the same time I don’t want to sit around and wait for a fight. I definitely respect Chael, he is a very tough guy, but he is more of a grinder and I think one of his best weapons is just his mind, he is mentally tough in fights… that combined with his wrestling.”

Chael Sonnen. Try saying that name ten times but really fast. You’ll hear yourself say ‘Chill son’ which is probably what Chael Sonnen needs to do. If you say it twenty times really fast, it turns into ‘Chilli Sunny’ which would be a good name for a brand of hot sauce that could only be consumed in the sun. [Source]