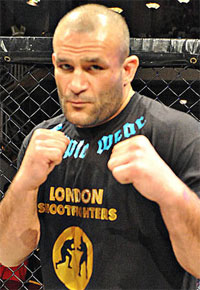 If you lead a life of crime, hate and a plethora of assorted badness, then God will reincarnate you as Mostapha Al-Turk’s eye. They should teach that in Sunday school and replace whatever religious text book with a 8×10 of Mostapha Al-Turk’s bloody, puss-filled eye. It’s the world’s strongest appetite suppressant. In fact, Dream should organize a Super Screwed-Up Orbital Socket tournament and throw Rumble Johnson’s post-Kevin Burns poked eye in the cage with Al-Turk’s post-UFC 99 poked eye and see which one advances to the next round.

Mostapha Al-Turk’s first fight in the UFC was against Cheick Kongo, which has to be the toughest hazing to get into any organization. Kongo dropped Al-Turk with a massive right and delivered some brutal ground and pound until a huge gash opened up right above Al-Turk’s eye. Dude hung in there, but the fight was abruptly stopped just before the end of the first round due to the fact that half of Mostapha’s bodily fluids were leaking onto the UFC mat in the MGM Arena. Dude caught a loss to an opponent that, at the time, was considered to be the next in line for the UFC heavyweight title (unfortunately, Velasquez and Mir stopped that). Al-Turk’s second fight was against devourer of spleens, Mirko Cro Cop. The fight played out like right kick hospital, left kick cemetery, right hand eye poke. Al-Turk caught a nasty finger to the eye early in the first round however Steve Mazzagatti failed to realize it. Mostapha tried to push through until the end of the round but was TKOd by a flurry of punches at about the three-minute mark. Bummer.

After seeing that disgusting photo Al-Turk took moments after the fight, the UFC decided to give Mostapha another shot at getting his first win inside the octagon. His third fight was slated at UFC 109 against Rolles Gracie. Just days before the fight, Al-Turk reported that England couldn’t issue him a Visa in time for the event and he was forced to pull out. The Mexicutioner stepped up at the last minute and laid down such a brutal beating on Rolles, that he was cut from the UFC in only his first fight. Yesterday, the UFC confirmed that Mostapha Al-Turk will have his third shot at UFC greatness next weekend at UFC 112 as he goes up against TUF 10 cast member, Jon Madsen, who is actually undefeated (that lost against Brendan Schaub on the show doesn’t count towards his professional record). Let’s hope Mostapha Al-Tuk’s orbital socket can stay out of trouble in Abu Dhabi next Saturday.