MMA Fighter caught with $1.2 million of marijuana stashed in his gym 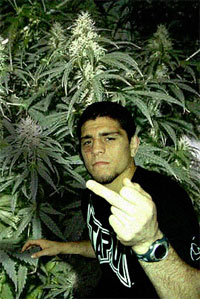 This story is not about Nick Diaz. Dude is entirely too smart to be caught with 130 plants and even if he had 1.2 million worth of marijuana in his place in Stockton, CA, no police officer would voluntarily place their self in front of the scrap pack. The 209 is strong with Nick Diaz, and marijuana is in stronger with the Strikeforce welterweight champion. In an interview with LA Times, Diaz told the newspaper that smoking marijuana is all ‘part of his plan’ and that when he’s high, he’s ‘more consistent’. Guaranteed that getting busted with over $1,000,000 worth of marijuana was simply not part of Travis Roesler’s plan. CourierPostOnline.com broke the news that Philadelphia police caught the 27-year old with enough marijuana to last East Hollywood for roughly an hour.

A former University of Pennsylvania football player and mixed martial artist is facing drug charges after police say they seized more than $1 million in marijuana from his training studio.

Investigators put the value of the drugs at $1.2 million. Roesler faces charges of possession with intent to distribute.

According to Norml.org, Travis Roesler could face a felony that could throw him in prison for 1-3 years and if he had a prior drug conviction, it’s an automatic three years in the slammer. Slammer? What is this, 1953? [Source]