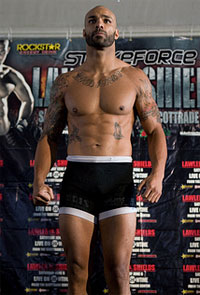 Mike Kyle landed more strikes and lasted longer against Fabricio Werdum than Fedor Emelianenko. In the heavyweight division, that sentence has incredible implications. Brett Rogers once said that Fedor is the ‘God of MMA’ and that ‘if you defeat God, you inherit his powers’. Unfortunately, Rogers just couldn’t pull together the W on November 7th 2009 to magically transform into the celestial being that he aspired to be. On that same night at the Hoffman Estates in Illinois, Bigfoot Silva took on Fabricio Werdum in a very interesting bout that some even say could have gone to Bigfoot Silva. In the first round, Silva managed to rock Werdum with a few jabs and then exerted most of his energy trying to finish him off. Werdum regained his composure, and for the remainder of the fight, it appeared that Bigfoot was thoroughly exhausted.

Now the guy who almost beat Werdum will face the guy who landed more strikes than Fedor Emelianenko against Werdum this Saturday at Strikeforce: Henderson vs. Babalu. Mike Kyle was willing to take on the EliteXC heavyweight champion with only a week’s notice, enabling the MMA world to witness Bigfoot Silva one final time in 2010 before he goes back to his indigenous environment of heavily wooded forests. And for those of you who want to get a hand on one of those ultra rare ‘Vai Cavalo’ shirts Fabricio Werdum wore around town in San Jose after he defeated Fedor, don’t worry, they’re coming to WorldOverEasy in a few days.