Did anybody believe that we would escape the current BMF hype without hearing from Conor McGregor? Think again. Just when everyone thought that the madness of the BMF title was simmering, McGregor took to Twitter to throw a little shade at the event. While he was at it, he even flexed his bank account to Dustin Poirier.

It’s well known that the inaugural ‘BMF’ title is on the line on November 2nd during UFC 244 in Madison Square Garden. Both Nate Diaz and Jorge Masvidal will compete for the honor of being the ‘BMF’ of the UFC, as long as earning themselves a piece of new hardware in the process.

Voicing his opinion of the title, McGregor sent a tweet. And, as expected, Dustin Poirier responded to McGregor like the natural competitor he is.

3 years 10 days since you won your last fight. Do the math champ

McGregor sarcastically wrote, “What date is that interim BMF title fight on again?”

Implying that basically, whoever wins the bout might earn themselves a shiny belt placed on their waist by The Rock. But, the actual title of being the ‘baddest’ is already reserved for McGregor, whether active or not.

Poirier responded by saying, ” 3 years 10 days since you won your last fight. Do the math champ.”

The Back and Forth Continues

Dustin’s tweet designated with the fans. His tweets are usually incredibly in line with what the majority of MMA supporters are thinking. Due to inactivity, Poirier believes there’s no way that McGregor believes he could claim to be the ‘baddest’ the UFC has to offer.

Again, McGregor responded. And, in the most Conor McGregor way possible.

Which honestly has absolutely nothing to do with Poirier’s response. However, McGregor and his fans tend to flex his finances in an effort to dodge the absence of recent brilliant performances in the octagon.

The History of McGregor and Poirier

Since the loss to Khabib at UFC Abu Dhabi, Poirier has been vocal on the internet in an effort to get a McGregor rematch.

Both men haven’t stepped foot in the cage since losing to Khabib. However, for Poirier, it was only one month ago. And for Conor, it’s been a year.

The pair last faced off at UFC 178 where McGregor beat Poirier in just 1:46. So, it’s possible that an imaginary ‘BMF’ title which neither man is competing for, could spark the matchmaking for a McGregor vs Poirer rematch.

Interested in the rematch? Or, do fans want Conor to fight the winner of the ‘BMF’ title? 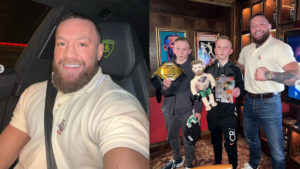