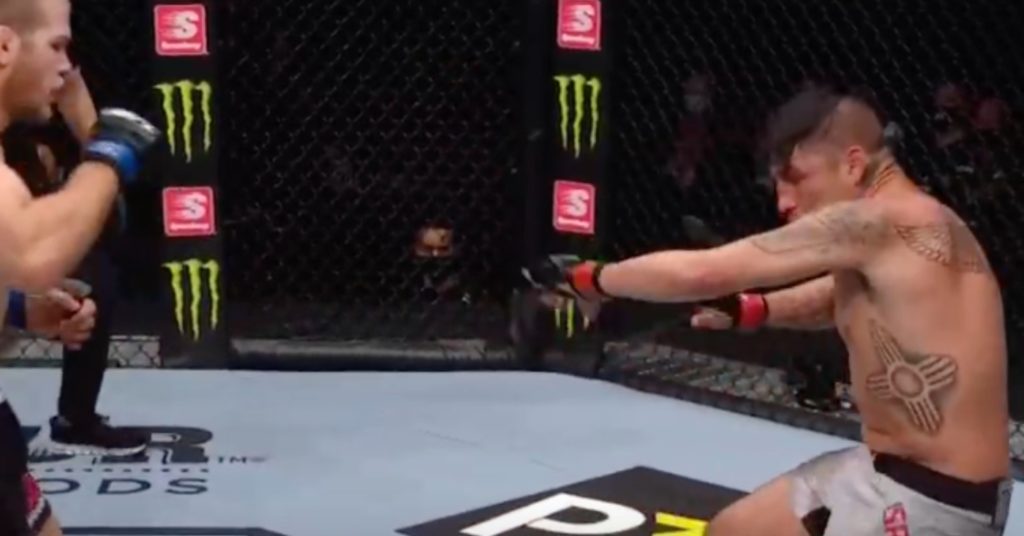 Diego Sanchez will look to make it four wins in five when he faces young Australian prospect Jake Matthews in a welterweight contest on the UFC 253 prelims.

Sanchez comes out aggressive. He receives some right hands from Matthews before falling but is back to his feet soon after. Sanchez misses a leg kick attempt. Matthews partially lands a few strikes while Sanchez misses another telegraphed leg kick. Sanchez finally lands one but is backed up to the fence. Matthews is patient and partially landing some punches but nothing that has hurt Sanchez as of yet. Sanchez has a few rushes forward but to no avail. Matthews lands a right hand. Sanchez times a takedown but Matthews reads it and sprawls quickly. He then gets Sanchez down and transitions to half guard. Sanchez looks for a leg lock but receives two big strikes to the head as the round ends.

A close round but I’d give the edge to Matthews. 10-9 Matthews.

Sanchez starts to rush in but doesn’t connect on Matthews. Sanchez is bleeding from his nose but it doesn’t seem to be affecting him as he proceeds to land a calf kick. He follows it up with another but gets caught with an uppercut as he rushes in. Sanchez is feinting a lot but Matthews remains patient as he lands a well-timed right hand. Matthews partially lands another uppercut. Both fighters are starting to swing but Matthews gets out of the way and returns to the center of the Octagon. Matthews continues to pick and land the more effective shots during the exchanges. The round comes to an end.

Have to give the round to Matthews for landing the better shots. 20-18 Matthews

Sanchez comes out slow and attempts the Jorge Masvidal knee but Matthews never bought it. Matthews proceeds to drop Sanchez that bloodies him and starts to unload brutal ground and pound. Sanchez is surviving but Matthews is on top at half guard. He transitions to full guard now as Sanchez momentarily attempts a guillotine but Matthews easily escapes. Sanchez creates space and attempts some up kicks. Matthews doesn’t want to let him up and looks to ground and pound again but enters Sanchez’s guard. Matthews is able to land some big hammerfists but Sanchez is still in the fight as he looks to attempt an armbar. Sanchez lands some elbows but Matthews escapes and lands some more hammerfists as the fight comes to an end.

Matthews has won this 30-27 on my scorecard.

🎤 As requested- we go into the corner of Diego Sanchez.

The Celtic Kid! ☘️@JakeMatthewsUFC continues his welterweight run on #UFCFightIsland