It has close to two years since the last time Luke Rockhold fought. Now he discusses who he may like to fight in his return, as well as how the upcoming fight between Jan Blachowicz and Israel Adesanya will go.

Rockhold actually has a pretty good idea of what type of Polish Power Blachowicz possesses in his hands. The last time he competed, the former middleweight champ got sent to the land of wind and ghosts by moving up to 205lb, and facing the now champ.

Since that brutal knockout in June of 2019, Luke has not been seen in the Octagon, even briefly seeming to retire. He has flirted with the idea of a comeback, but has not actually made anything official.

In spite of the fact that he lost to Jan Blachowicz, Luke Rockhold actually believes that Israel Adesanya stands a pretty decent chance to become champ-champ when he faces Jan at UFC 259, this weekend.

Speaking in a recent interview, Luke explained that there were aspects of his game that he felt like would be a threat to Jan, but he did not get to fully use them. However he thinks Izzy will be able to succeed where he failed, using similar tactics.

“I like Israel in the fight. You never know, Jan’s got a very jerky-jerky stye,” Rockhold said.

“I rushed the fight. I thought he was more visible. He wasn’t as clean and as confident as I thought he would be… If I was more patient and just waited for my shot and my opportunities, it would have been a much different fight.

With it having been so long since Luke Rockhold last fought, many fans are wondering when he may return, and who he will fight. He said that he is hopeful for a summer return, provided he can find an opponent that appeals to him.

As far as potential opponents go, the former champ is looking to return to middleweight, although he is not ruling out another fight at 205lb. That said, he is not looking for a rematch with Chris Weidman like he previously suggested.

“I think Chris Weidman, he’s not what he used to be, and if he were to somehow change it around in this fight with Uriah Hall and do something, maybe,” Rockhold explained.

“Right now, these other two fights are definitely more in my viewpoint. This Marvin Vettori kid’s doing pretty well for himself, and Darren Till’s done a couple of things here. So, I like those fights.”

One fight that seems to spark his interest a bit is Paulo Costa. Luke was not impressed by the most recent excuse the Brazilian gave for why he lost to Israel Adesanya, and would relish the chance to shut him up.

Who do you want to see Luke Rockhold fight when he returns to the Octagon? 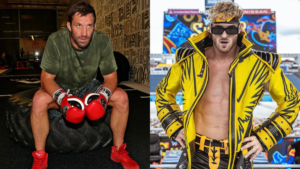 Luke Rockhold Vows To Retire If He Doesn’t Knock Out Logan Paul: ‘I Gurantee it’