‘Bones’ last fought in a controversial unanimous decision against Dominick Reyes in February 2020. Since then, the former UFC light heavyweight has been transforming his body for a move to the heavyweight division, which he has been passionate about over the last decade. UFC commentator and interviewer Sanko had this to say about Jones while appearing on Morning Kombat’s Room Service Diaries:

Jones is aiming for his long-awaited heavyweight debut in 2023. That said, rumors about ‘Bones’ fighting in 2022 continued circulating. The MMA community has shown concerns about the former light heavyweight champion ever moving to heavyweight after potential 2022 matchups fell through for one reason or another.

I’m preparing to fight Stipe December 10 in Las Vegas. Not really sure what’s going on between Stipe and the UFC but I’m ready to compete! I’m going to control what I can and stay in shape. https://t.co/3Ouu9Xk8Ns

Jon Jones hasn’t lost since his disqualification against Matt Hamill in 2009. Yet, some MMA fans argue that ‘Bones’ should have lost his last two fights against Thiago Santos and Dominick Reyes. Although he beat Santos by a split decision, more people seemed to believe Reyes won at UFC 247, despite the unanimous decision.

During the same episode of Room Service Diaries, Luke Thomas presented Laura Sanko with a narrative that Jones was relatively declining at the end of his light heavyweight run. Sanko responded by saying:

“I think for him, it has always been about stuff outside of the Octagon. I really do. I think to some degree, you’re naturally gonna have some competitors that learn how to fight you better. Over time, people are going to get smarter about how they approach a Jon Jones fight…I think we saw Dominick Reyes at the peak really understanding how to get past that forcefield that he puts up. Thiago Santos is another. I think part of it is people figuring Jon [Jones] out a little bit, but I really attribute most of it to him not being fully dialed in.

Jones has two potential opponents for his heavyweight debut. The first is Stipe Miocic, who is arguably the division’s GOAT. Unfortunately, he doesn’t seem to be rushing back to fight ‘Bones’. Secondly, UFC heavyweight champion Francis Ngannou is a clear option.

I’m bringing all the heat @Stipemiocic, I got that fire you could never put out. Sign the contract #Ufc282

‘The Predator’ would love to fight the former light heavyweight champion. Unfortunately, he’s been in a contract dispute with the UFC and wants more money before fighting again. If Jones ends up fighting Miocic or Ngannou in 2023, the matchup has potential to be the most anticipated fight of the year. 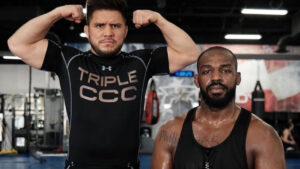