Laura Sanko has quickly become one of the most popular commentators in the UFC. Primarily appearing on Dana White’s Contender Series on Tuesday night, Sanko has been able to parlay her own MMA career into a successful turn in the broadcast booth after spending years as a sideline reporter alongside Megan Olivi and Heidi Androl.

After joining the LFA broadcast team for what seemed like a trial run, Sanko joined the DWCS crew and just recently hit her one-year anniversary since being promoted to the broadcast booth. Speaking to InsideFighting on YouTube, Laura Sanko discussed her move to the booth and being front and center, witnessing the next generation of MMA stars firsthand.

“The move into the broadcast booth for Dana White’s Contender Series was fantastic. Last year, I’ve been on every single episode of that show and it’s nice to see my role kind of continue, to grow. That was always the goal on that show. It’s my favorite. You know that that show is kind of its own animal. Not only do you have what makes MMA special in any application of it, you have that added drama of Dana White being right there. Then you know, these young men and women achieving their lifelong dream, potential of getting into the UFC. Being there for that, it’s just awesome.”

While Laura Sanko was quick to point out that she is technically not the first female commentator in UFC history, the former atomweight fighter recognizes that she is a trailblazer in the sport of MMA.

“It’s kind of an interesting story on UFC. Before Zuffa and before Dana White and before all of the people we think of as being UFC. Before they were involved when the UFC was very first created and it was that wild tournament style with no weight classes and basically no rules, like a total wild west situation. On UFC 1, Kathy Long was one of the color commentators, so I’m not technically the first. But I’m definitely the first under the Zuffa banner and yeah, it’s been really cool.

“I felt like… I don’t know it took a long time for me to make that dream come true. I’m still working on getting to that fight night status, but I love it and it’s kind of something I’ve done my whole life. Just sort of being one of the guys and I’m fortunate that my broadcast experience and my fight experience met at the perfect apex. It’s the women that are early enough in the sport that there are not hundreds and hundreds of them that would be able to fill a role like this and have the TV chops to do it.”

Laura Sanko’s work as a commentator on DWCS has been praised by the MMA community since being promoted to the role on DWCS. Now fans are asking when she will make the leap from Contender Series to Fight Night. Speaking about a potential jump to that next level, Sanko says that she is “really close” to making it a reality.

“Yeah, that’s definitely the goal. I’m a naturally competitive person. I didn’t come into this role because I had a broadcasting background. I had a fight background which probably tells you about my mindset and my drive. That translates over into what I’m doing now. I want to be able to call a quote-unquote real UFC fight. That is the goal and I think we’re close. I think we’re really close to being able to make that happen.”

What an absolutely insane night!!! Always a good time calling fights with @bisping and @DanHellie . On a night of standout performances who stole the show? #DWCS #DWCS2 pic.twitter.com/NyjpGC45ZM

While the presence of Dana White likely brings some added pressure to the men and women that step inside the Octagon on Tuesday nights, Laura Sanko says that she does not feel that same pressure with the UFC President within earshot.

“Yeah, no. That doesn’t bother me at all. I don’t mind that at all. In fact, you know Dana is an interesting cat. I don’t know if people know this, but he is very involved in every detail of the broadcast. What the UFC puts out on ESPN or whatever platform they’re working with, at any given day, is their product really. So, he pays attention to every single detail. I guess I’m kind of used to it I guess is my answer and no, it doesn’t bother me. Any chance I get to regardless of who’s listening.”

Going 4-1 as an amateur, Sanko make her pro-MMA debut at Invicta FC 4 in 2013. She earned a second-round submission over Cassie Robb. After becoming pregnant, she chose to retire from combat sports but found another way to leave her mark on the industry.

“I think we all want to leave our mark in one way or another on the world. Whether it’s being a mom and leaving your mark on your children, or being a hall of fame football player. I think we all want to leave some sort of legacy behind. So for me, not continuing my fight career… I had a very short fight career. This is my way to leave my little fingerprint on this sport and it means the world to me to be able to do that. Records can be broken, but there’s only one first.” 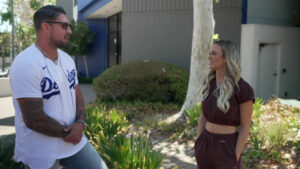 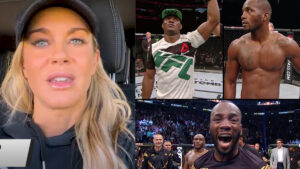 Laura Sanko Comments On Kamaru Usman’s UFC 278 Performance: ‘I Do Think He Made An Error’ 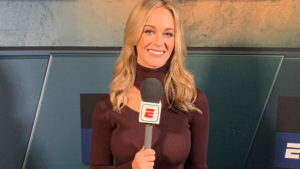 Laura Sanko Now A Licensed Official In Missouri: ‘Yours Truly Is A Judge’ 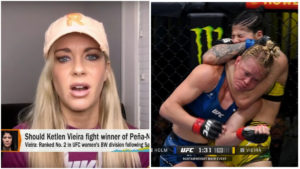