Things are taking a dark turn after Hollywood rallied around young boy Keaton Jones, whose viral video about being bullied has been taken down after alleged racist comments and photos with a confederate flag were discovered on his mother Kimberly Jones’ Facebook page.

Sometime during the massive outpouring of support — the video has been viewed over 15 million times — his mom, Kimberly Jones, set up a PayPal account where people could donate money, causing some to question her motives.

Jones is also under fire for some alleged posts on a personal Facebook page that has since been set to private.

She also took to her Instagram account on Monday to defend herself against claims she is using her son’s story for money.

“I love my kids: Ya’ll people do not know me or my family,” Jones wrote. “Did y’all know that my son Keaton was spit on in school, picked on by teachers, that supposed to be there for him??? I’m guessing y’all didn’t because y’all wanna steady Judge me and say I’m using him for money that’s false.”

A Bellator MMA fighter Joe Schilling, who was touched by the young boy’s heartbreaking story, reached out to Jones to invite Keaton to show. He said he was surprised by Jones’ reaction.

Schilling posted a video on Instagram and said in the caption, “Go look at her ig watch her story posts she just running a money scam. Really really sad and disgusting. Tagging celebrities trying to get them to donate to her go fund me account smfh. @kimberlyjones_38 @danawhite @gracegracieworld @snoopdogg @plies.”

“I feel pretty stupid right now,” Schilling said in his video. “I was pretty moved by Keaton Jones video so I reached out to his mom and was going to bring him out to LA for a Bellator event that’s coming up, big show, and and introduce him to fighters, be his friend, and she just wants money. She just wants me to share her GoFund me account.”

Schilling said he asked Kimberly Jones during their conversation what the GoFund me account was for to which he claimed she said, “You know Christmas is coming and I’m a single mother, blah, blah, money’s tight.”

Schilling posted a snapshot of a conversation where he said he was unsure if the person behind the profile was Keaton’s mother.

“@kimberlyjones_38 WELL WELL WELL AS YOU ALL KNOW I FUCKING HATE RACISIM TAKE A LOOK AT WHAT SOMEONE CLAIMING TO BE KEATON’s MOM HAD TO SAY FUCK THIS BITCH!! Now this might be a fake account pretending to be his mom. But this person who is doing the go fund me account needs to be put on blast.”

The GoFundMe account in Keaton’s name has over $58,000 in donations.

GoFundMe tells us the page labeled “Stand Up for Keaton,” which was opened 2 days ago, is no longer accepting donations. Since Keaton’s anti-bullying message went viral over the weekend, the page has pulled in $58,249 in donations … however the guy who started it is putting the charity on hold. GoFundMe says it needs to contact Keaton’s mom, Kimberly Jones, to ensure she’s the beneficiary … since the guy who started the page doesn’t know her. So far, the company’s been unable to reach her. 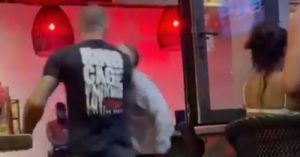 Joe Schilling and Bar Sued for Over $30,000 in Viral Knockout Video 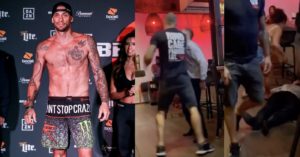 Joe Schilling: ‘No Charges Have Been Filed Whatsoever’ In Bar Fight Incident 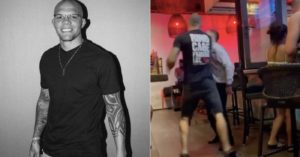 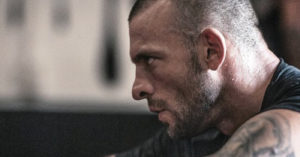