UFC Is In Negotiations To Book Jorge Masvidal vs. Kamaru Usman

Last night it was announced that Gilbert Burns forced out of next weekend’s UFC 251 main headliner bout against Kamaru Usman after being tested positive for COVID-19. But we have good news comes from ESPN’s Ariel Helwani that UFC is in negotiations to book Masvidal vs. Usman.

As per the report, both parties are still in talks to make this bout happen, and nothing is final yet.

Immediately after the Burns news got public, Jorge Masvidal took to Twitter and offered up his services. Now it seems like UFC is willing to negotiate financial matters with ‘Gamebred.’

Masvidal also took COVID-19 test as per his manager:

Jorge Masvidal is getting tested for COVID-19 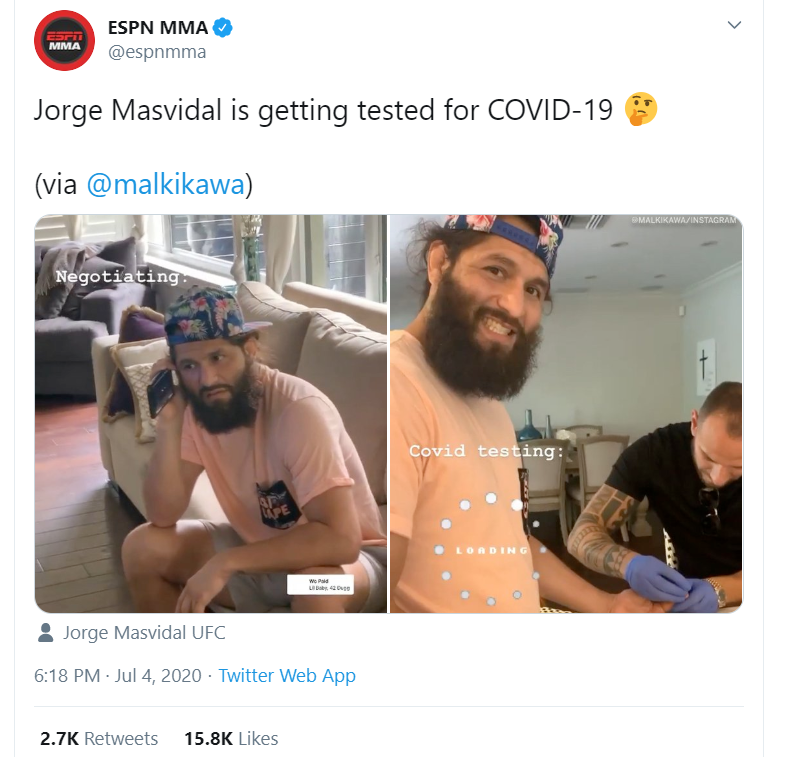 Originally Masvidal vs. Usman welterweight bout was supposed to go down, but contract negotiations didn’t come to fruition.

Masvidal is currently riding a three-fight win streak as his latest win came against Nate Diaz at UFC 244 via TKO this past November.

Meanwhile, Kamaru Usman last fought in December, where he scored a fifth-round TKO win over Colby Covington at UFC 245.

Currently, UFC 251 is headlined by a featherweight title bout between Max Holloway and Alex Volkanovski.

Of course, there will be some hurdles to get this bout done since both parties are still in the USA and need to follow certain protocols to being cleared.

The Usman-Masvidal talks are ongoing and moving in a positive direction. While there are still multiple hurdles left, feeling confident about the direction of the talks and barring any last minute issues it appears inevitable this fight gets done.

No, Usman never got on the flight after Burns withdrew. Getting him and Masvidal to Abu Dhabi is one of several hurdles. https://t.co/5JaQroSiCU