The main event and light heavyweight championship is underway in Houston! Reyes instantly lands a clean left and Jon starts to kick low early. Reyes goes for a high kick and Jones blocks it. Jones lands two more leg kicks as the Reyes continues to try and find his range. Reyes barely misses a long right hook, and Jones counters with another low kick.

The second round starts and Reyes lands nice calf kick. Reyes tries a body kick but it is checked by Jones. Dominick lands another good low kick, but Jones counters with a big body kick.

Reyes Lands a Shot and Swarms

Reyes lands a shot and chases down Jones, missing half the strikes he threw. Jones checks Reyes strong low kick and then throws a leg kick himself. Reyes tries a kick and Jon counters with a left hand. Jones lands a strong left hook from a distance. Jones misses a spinning back kick, and the two continue to fight at range. Reyes throws a big left that barely misses. Jones lands a crisp jab as Reyes came into the pocket. Reyes lands a good overhand right, but Jones counters with a high kick. Jones lands a big left hand in the pocket. Reyes touches Jones with a one-two, and lands another combo as the second round comes to a close.

Round three of the main event starts and Jones opens with an inside low kick. Reyes lands a big left high kick that does not seem to phase Jon. Reyes lands a hard round kick to the body and Jones keeps the pressure coming. Dominick lands two low leg kicks, and Jon counters with one of his own. Reyes misses on a huge shot but follows up with another leg kick. Reyes lands a good uppercut in the pocket and Jones follows with a high kick attempt.

Reyes lands a big left to the body as he stuffed the takedown attempt. Jon lands a good right hand as Reyes throws a big high kick. Jones lands a good hook with a little under a minute remaining. Reyes lands a good body shot with a straight left. Jon goes for a flying knee as the round ends.

The championship rounds begin and Reyes starts with a body kick. Reyes lands two clean right hands and follows them up with a combination. Jones goes for a takedown and is stuffed. He is able to maintain a body lock.

Jones Gets the Takedown

The fifth and final round of the main event begins! Reyes starts the action with a clean left cross. Jones shoots in for a takedown and is able to get Dominick to the canvas. Reyes gets back up to his feet but Jones does not let up on the pressure. Jones lands a good elbow in the pocket as he slips Reyes’ strike. Jon lands a low kick and follows it with a huge kick to the body.

Jon Jones Lands Another Big Kick to the Body

Jones continues his pressure and lands a big left hand. A spinning back kick to the body connects for Jones. Jon misses a high kick and Reyes lands a counter. Jones continues to land leg kicks with under a minute to go. Jones attempts a spinning back fist, and the fight goes to the judges.

Check The Highlights Below:

IT ALL COMES DOWN TO THIS. 🔥

The challenger pushing the pace in R4!

🏆 The LHW gold hangs in the balance! #UFC247 pic.twitter.com/IqnJzawvMY

After a hard-fought battle, @DomReyes limps out of the Octagon #UFC247 pic.twitter.com/updBDq2gqd 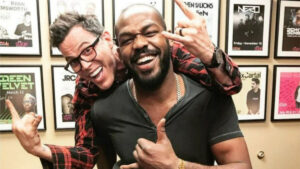