Joe Schilling Batters A ‘Pervert, Bum’ For Pleasuring Himself With Sex Toy In Gym Bathroom

Joe Schilling Catches A Man Using A Sex Toy On Himself In His Gym's Bathroom, Beats Him Up Afterwards 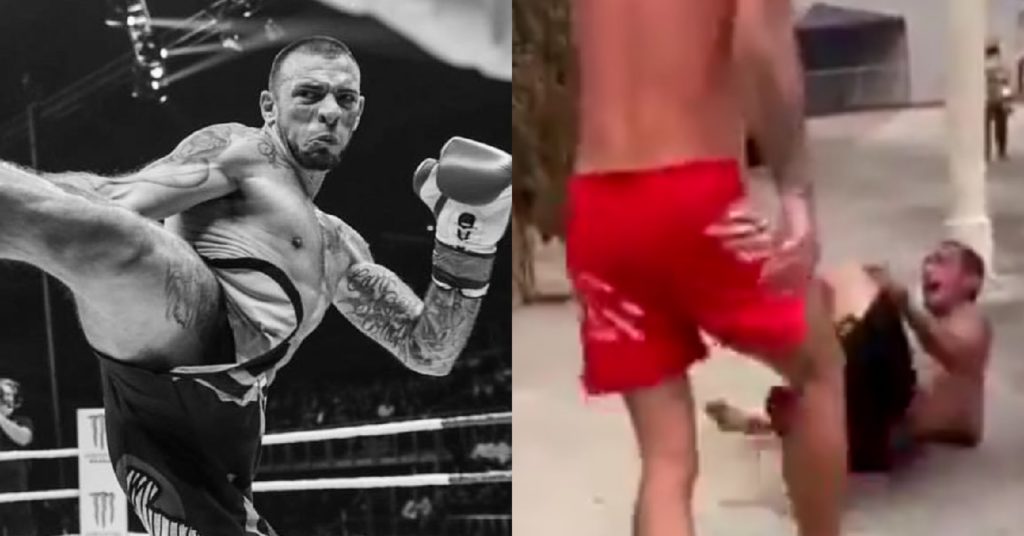 There are some things that you just don’t do in an Muay Thai gym. Joe Schilling came face to face with someone who blatantly crossed that line, and made that person pay the price for his transgressions.

Having competed professionally as a boxer, kickboxer, and mixed martial artist, it is safe to say that Schilling is a bad dude. Although he has bounced around a few promotions, he has largely competed in Glory or Bellator for the majority of his career. However the last few years have seen him putting more of a focus into training others at his gym, The Yard Muay Thai.

Here Is Where Things Get A Little NSFW, As Joe Schilling Thumps A Homeless Man

With that in mind, one would think that you would not want to do anything to cross Joe Schilling. However, as a recent post to his Instagram Stories showed, this was not the case. A video that was saved and re-uploaded to Twitter sees Joe beating up someone on the street, saying that he was a pervert and doing inappropriate things in his gym’s bathroom. He then explained in more detail what happened, revealing that the man in question was apparently taking a long time in their bathroom, only for students to discover that he was…pleasuring himself with a sexual enhancement tool.

“A little context on the video you just saw,” Schilling explained. “Running my gym, this guy sneaks in, this bum sneaks in and starts taking a shower. A couple of students tell me that there’s a bum in the bathroom taking a shower. I get it, bums need showers too, although you’re trespassing. So I’m waiting for him to come out. Water turns off. I’m knocking on the door, he won’t answer the door, he won’t open the door. He starts screaming when I’m knocking on the door. He finally opens the door, and he’s f–king himself in the a– with a dildo. That’s why I did what I did.”

Even if you feel that Joe Schilling overreacted, this is beyond a disturbing situation. Honestly this seems like behavior from someone who is mentally unstable. Regardless, he definetly picked a bad place to do his thing, and will probably be never make that mistake again.