Jiri Prochazka Favors Israel Adesanya in Rematch With Alex Pereira; ‘I Think He Can Be the Champion Again’

Despite his jaw-dropping fifth-round TKO over Israel Adesanya at UFC 281, Alex Pereira is already being treated as the underdog in a potential rematch.

Pereira scored the biggest win of his mixed martial arts career on Saturday night, defeating Adesanya for the third time across two different promotions. As the minutes ticked away, it appeared Adesnaya would walk out of Madison Square Garden with a unanimous decision victory. With nearly three minutes to go, Pereira unloaded a barrage of strikes that stunned Adesanya. Pressed against the fence with nowhere to go, referee Marc Goddard stepped in, calling for the stoppage and thus crowning a new UFC middleweight champion.

Even though Pereira has proven his ability to defeat Izzy on three separate occasions in two different combat sports, many are skeptical as to whether or not he can do it again in a potential rematch, including current UFC light heavyweight champion Jiri Prochazka. Speaking with ‘The Schmo‘ on YouTube, Prochazka shared his belief that Israel Adesanya can recapture the UFC title once again.

“I expect everything because they both is the high-level guys. I know Adesanya style I like personally and I was [rooting] for him, but bad happened and in the fifth-round here a little he broke his leg and that’s what happened.

“I think he can be the champion again. I never seen so precise work like these four rounds with Pereira. That was amazing. Everybody can say everything, but that was amazing work.”

With talks of an immediate rematch between Israel Adesanya and Alex Pereira already heating up, Jiri Prochazka is all for seeing the two warriors run back their UFC 281 showdown.

At UFC 275, Jiri Prochazka captured the UFC light heavyweight title when he submitted former titleholder, Glover Teixeira, with just 28-seconds to go in the contest. Three months later, Leon Edwards would shock the world when he delivered a picture-perfect head kick that flatlined Kamaru Usman to capture the UFC welterweight championship. By all accounts, Usman was one minute away from retaining the title in an otherwise dominant performance.

Then, of course, there was this past weekend’s UFC 281 main event that saw Israel Adesanya in firm control of his clash with Alex Pereira. Just minutes away from a unanimous decision victory, Adesanya suffered the same fate as Teixeira and Usman, surrendering his strap after being within arm’s reach of a win.

On December 10th, Jiri Prochazka will attempt to get the job done before the fifth round as he rematches Glover Teixeira in the UFC 282 main event with the light heavyweight title on the line. 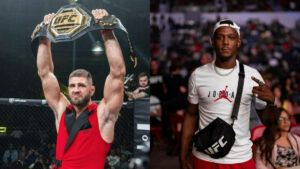