If Alistair Overeem’s words are congruent to the radius of his arms, then we would all have concussions right about now. After UFC 122, Dana White made a comment regarding Alistair Overeem not being ranked in the top ten heavyweights in MMA. Let me reiterate this for those of you who deny the merits of winning two championship belts in separate sports. That’s like Dirk Nowitzki winning an NBA Championship and then grabbing the Stanley Cup just a couple weeks later. Perhaps that analogy of Overeem winning the K-1 GP and being the Strikeforce heavyweight champion is somewhat off. It would appear that it’s more like David Bowie winning a Grammy for Rise and Fall of Ziggy Stardust and then being awarded an Academy Award for his role in Labryrinth — and both of those scenarios should have occurred.

The ten year old Japanese Ranking site ‘MMAVT’ posted its updated ranks last weekend which covers the top three hundred heavyweights in MMA. That number may seem a little daunting, but I can guarantee you will read it to roughly eighty, and then gradually lose interest. Don’t worry, it’s Google translated which also yields to some rather interesting Japanese-to-English translations.

Check out the heavyweight rankings originating from Japan and if you’re bored, you can check out all their rankings here. Pretty interesting stuff — although Ray Mercer not making the top twenty is a clear and glaring error. [Source] 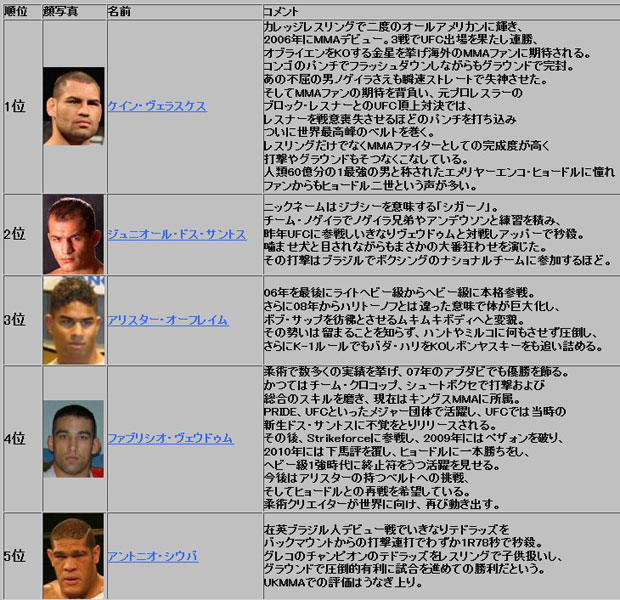 BJ Penn has a radical way to make MMA exciting, and it involves no belts OR decisions
← Read Last Post