The UFC has yet to sort out its differences with the hackers who attacked their domains last week, but Dana White has gone on record to say whoever is responsible will get their “asses kicked” by the government. I generally get my daily “ass-kicking“ fix from websites like WorldStarHipHop.com, but the idea that these particular ass-kickings will probably occur in a courtroom makes me less than excited than if they came in the form of physical ass-kickery. In any case, no asses can be kicked until they are caught, and I doubt that’s going to happen before the sun melts the earth.

While the hackers broke multiple laws and tampered with US .gov sites and retail webshops, the FBI has been firing back at websites involved with pirating web-stream activity such as Firstrowsports.tv, Firstrowsports.com and Soccertvlive.net in what are the first in a “Super Bowl Crackdown” targeting sites that link to unauthorized global sports streams. According to TorrentFreak.com – it appears that more sites will be pulled by the end of today in a global blitz, and every last one of you who intended to illegally stream UFC 143: Diaz vs. Condit are out of luck. Instead, you’ll be greeted by this friendly reminder that the fun is over: 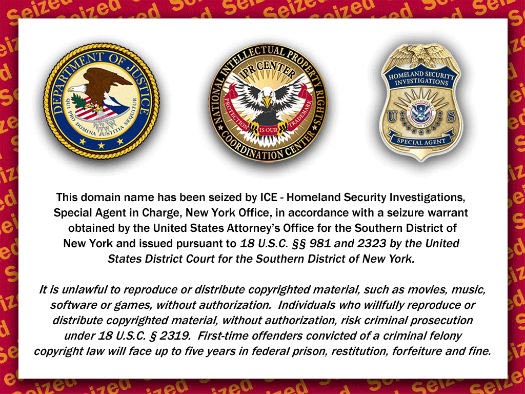 It appears that putting SOPA/PIPA on hold has had absolutely no affect on web censorship with regards to blatant copyright violation such as online sports streams. The international streaming sites can now be taken down by the FBI under the ACTA bill, which was secretly signed into effect last week while we were all busy distracted SOPA. And from stage left emerge the men adorned in Guy Fawkes masks, from stage right, the riot shields and batons – microwave some popcorn, sit back, and watch the revolution.