Hey, Rousimar Palhares is kind of a nice guy

When Rousimar Palhares grabs a heel, he hooks it and never lets go. With the twisting of bone and flesh he makes sure his opponents will never forget him. He’s a monster, a horrifying Jiu Jitsu nightmare that has you waking up in cold sweats in the middle of the night-frantically checking to see if your appendages are still intact. After his fights however, he captures something else; the hearts and minds of Brazilian children, and like his opponents in the UFC he will never let go.

It’s true, Rousimar Palhares is kind of a nice guy.

After his win in Rio last weekend, Rousimar (it’s so hard for me to not call him Paul Harris all the time now) and Murilo Bustamante went down to GRAACC, which is a support group for children with cancer. They hung out, had fun and shared stories about the old days of MMA; like when Murilo upkick KO’d Jerry Bohlander in 1997. That was awesome. Judging by this picture Murilo, the kids and Paul Harris had a great time. 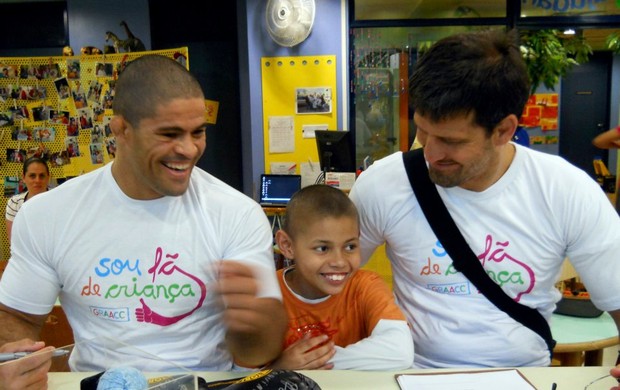 This new episode of The Reem may be the coolest one yet
Read Next Post →
Click here to cancel reply.