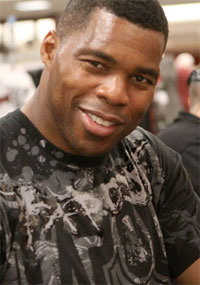 This morning while I was wasting away in traffic on my way to be indentured servant government day job, I turned to the Howard Stern Show on Sirius Radio and listened to Herschel Walker talk about his upcoming MMA fight. I also listened to Stern proclaim that Walker might be the next Jesus. That might start some beef with this dude who is pretty sure Barack Obama is the Messiah, but if the claims Walker made on Howard’s show are true-I’m leaning toward Walker being at the top of the ‘Next Jesus candidates’ list. He sleeps only 4 hours a day and eats only a meal of salad, soup and bread and he told Stern he has never choked the chicken, spanked the monkey, or tugged on the pickle in his entire 47 years of life on this earth. I’m not a man, but I’m pretty sure that’s something of a miraculous impossibility. He also apparently has only banged two chicks in all his years. We all know this is not even scientifically possible for a mere mortal professional football player.

So, yeah…Stern might be onto something-if Walker isn’t the Second Coming of Christ, then maybe he’s a human fruit fly or something. [Source]