Get hyped for the return of Bellator tonight

There’s a victorious happy feeling you get when you pull the clothes out of the washing machine to put them in the dryer and see a crumpled soggy five dollar bill waiting there at the bottom just for you. You get that same feeling when the drive thru person at Taco Bell screws up your order and instead of the two tacos you paid for with the last $1.79 in change you were able to scrape together from your car ashtray-you end up with two tacos plus a burrito supreme and some cheesey fiesta potaoes. All you can do is smile and raise your hands in the air and yell out in the voice of a world cup soccer commentator, “GOAL!”

Well, you should have that feeling about tonight’s return of Bellator on MTV2. It’s once again time for weekly live face smashing to ensue. No more crying and whining about there being no mma to watch on a particular weekend. Bellator is back to save us from enduring Jersey Shore and Bad Girls Club marathons on our lonesome Saturday nights. We should all be shouting out, “WINNING!” like Charlie Sheen right about now. Bellator is kicking off Season 4 with the Bellator 35 Welterweight Quarterfinals tonight featuring a main event between Chris Lozano and Lyman Good. The card also features the familiar faces of Jay Hieron, Dan Hornbuckle and Jimmy Wallhead.

Now go ahead run around your living room superman punching the air and axe kicking the giant teddy bear your girlfriend gave you for Valentine’s Day. When you are all worn out and out of breath go ahead and lie down for an afternnon nap. There’s plenty of time to catch a few refreshing winks before the action starts at 9pm EST on MTV2. 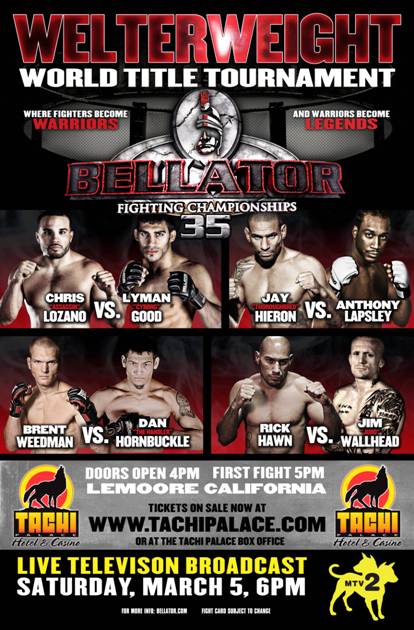