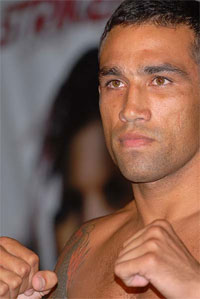 Knowing you’re going to fight Fedor is probably just like being told you’ve been assigned to chauffeur Naomi Campbell around New York City. You can train for every possible scenario, but in either situation, you’re going to get caught with an overhand right you never saw coming and spend the rest of your evening wondering what you could have done to avoid it. Most of Fedor’s previous opponents never had successful careers after facing him. Some have even been forced to apply for part-time jobs as Police officers in Bettendorf, Iowa. Affliction played host to Fedor’s first two American appearances against Tim Sylvia and Andre Arlovski before closing shop and becoming clothing sponsors, exclusive to the UFC. The fans were bummed, the fighters went to other organizations, and the only ring to harnessed the power of Fedor’s overhand right on US soil was hidden away somewhere in Southern California.

Rafael Cordeiro is one of the greatest trainers in MMA history who’s unorthodox striking exercises produced the fighters that ruled Pride for a decade including Wanderlei Silva, Anderson Silva, Mauricio Shogun Rua. More recently, he’s set his sights on helping Fabricio Werdum do what no man has ever done before, and to do so, he has resurrected the Affliction/M-1 Global ring where Fedor submitted Tim Sylvia and viciously knocked Andre Arlovski’s consciousness into the metaphysical unknown. If psychology books could understand this thought process, it will be in the same chapter that breaks down Chael Sonnen’s confidence and Paulo Filho’s love for fishing. We’re just under 2 weeks away to see if Fabricio Werdum has found the path to dethroning the Last Emperor. In the meantime, microwave some frozen pizza and watch him train in the long lost Affliction ring. [Source]