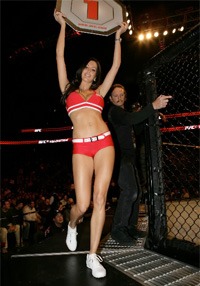 It looks like all you fanboys are going to have to resort to that stack of UFC tapes buried under your stash of He-Man action figures to relive all those Edith Labelle fantasies that have gotten you through those lonely Friday nights (like tonight). It looks like the UFC will no longer be using her expert ‘holding a ring card above my head’ services anymore. Her name was pulled from the UFC site a couple of days ago and it’s been confirmed today that the UFC and Edith Labelle have parted ways. It’s still a little fishy though, this is what her manager had to say about the entire ordeal:

‘Something happened. But at this time, I can only confirm that Edith no longer works for the UFC.’

There’s no mention whether or not she was fired but it’s sort of suspect that they hired the new ring card girl at UFC 101 and then just a day before UFC 100, Edith Labelle is out. It’s dog eat dog in the ring card girl business (then dog puke dog because its had a bullemia problem since it was in highschool). Luckily we have an Edith Labelle gallery (for some reason named ‘Larente’) up on MiddleEasy.com to hold you over while you dust off those highlight reels of Edith’s money maker (which was her entire body). We also have that new chick too, Natasha Wicks. All the more reason to post on the MiddleEasy Message Boards as soon as humanly possible. [Source] 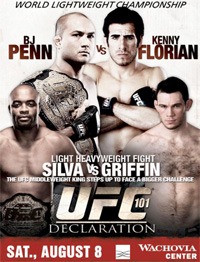