Some shit went down in Grozny, Russia yesterday at Akhmat Grand Prix. A bunch of guys with complicated names beat the crap out of each other like any other MMA event. However, when Magomed Ankalaev stepped into the cage against this “dude” Lloyd Marshbanks something was different. Perhaps because it was the shortest fight on the card, or maybe because of how laughable it was, maybe even how familiar it seemed

If anyone took the time to look up Lloyd “Kadillac” Marshbanks, it wouldn’t really surprise you with the outcome of the match. Marshbanks was 19-18 coming into the fight with 10 straight losses in a row. 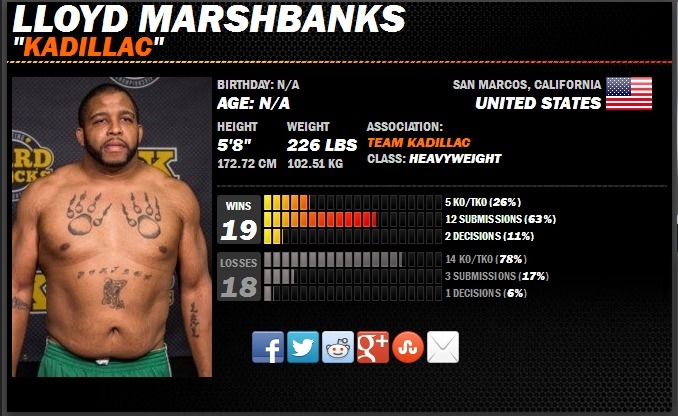 Still, the way Marshbanks dives across the canvas and proceeds to tap out to strikes in a mere 15 seconds is not something you’d expect. It’s pretty ridiculous. Shades of Bob Sapp bad, even. I still love watching it though, and I think you will too.

At least now Marshbanks is at an even 19-19, which is just satisfying numerically. Watch the whole fight below if you want the suspenseful build-up to this hilarious “dive”.
https://www.youtube.com/watch?v=zZMzlO4rXgA