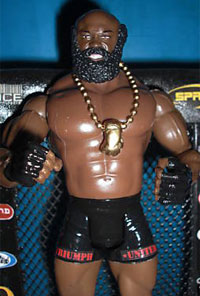 Ask any MMA fan, The night Seth Petruzelli knocked out Kimbo Slice in 2008, everyone remembers where they were. It was like the MMA world’s version of the JFK assassination. I was on the floor of my North Dallas apartment that doubled as a habitat for every type of roach on the face of North America. I used to catch them and stick them on a piece of paper so that I could catalog the various species I would find rummaging through my box of Cap N’ Crunch on a Friday night. When Kimbo Slice was knocked out in EliteXC, I’m sure everyone of those roaches felt it in their little insect hearts.

Sherdog asked Scott Coker whether we’ll see Kimbo Slice vs. Herschel Walker in the near future and it looks like Kimbo Slice’s appearances on CBS are done-datta.

“You’re like the sixth person who’s contacted me saying, ‘Hey, you have to put together Herschel Walker vs. Kimbo Slice,’. The thing is with Kimbo is he was successful with the ratings, but when we purchased (the contracts) from Pro Elite, the deal at that time (for Kimbo), we felt was too rich for long-term viability…We haven’t revisited it internally yet, so as of right now I think we’re going to stick with our course, which is putting on the best fighters in the world in the best matchups.”

Now that Strikeforce is out of the question for Slice’s future, just imagine how huge Kimbo would be in Japan. Dude would be marketed like Bob Sapp 2.0. [Source]