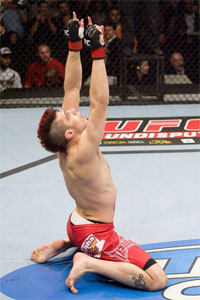 In case you didn’t know, Dan Hardy just turned 30 about two weeks ago. I can’t help but wonder if surpassing the three decades of life marker has caused him to begin contemplating the meaning of his life and spurred him to begin changing things around a bit in his life. He might have started this 30 year old change via an end to a small four fight losing streak in the UFC when he KO’d Duane Ludwig in the first round at UFC 146. If so, that’s a bold statement to make about life going in to your thirties: punching life right in the face and knocking it out for the win. Everyone should approach their third decade of life in this manner instead of sitting in front of the TV, crying into a half gallon tub of neopolitan ice cream with a side of cool ranch Doritos during your own personal pity party.

Dan didn’t only decide to end his UFC losing streak he also decided to give himself a brand new look. He shaved off his mohawk and he really hopes you won’t even recognize him anymore now that he’s done so. Check out the new 30 year old close shaven stubbly head of Dan ‘the Outlaw’ Hardy.