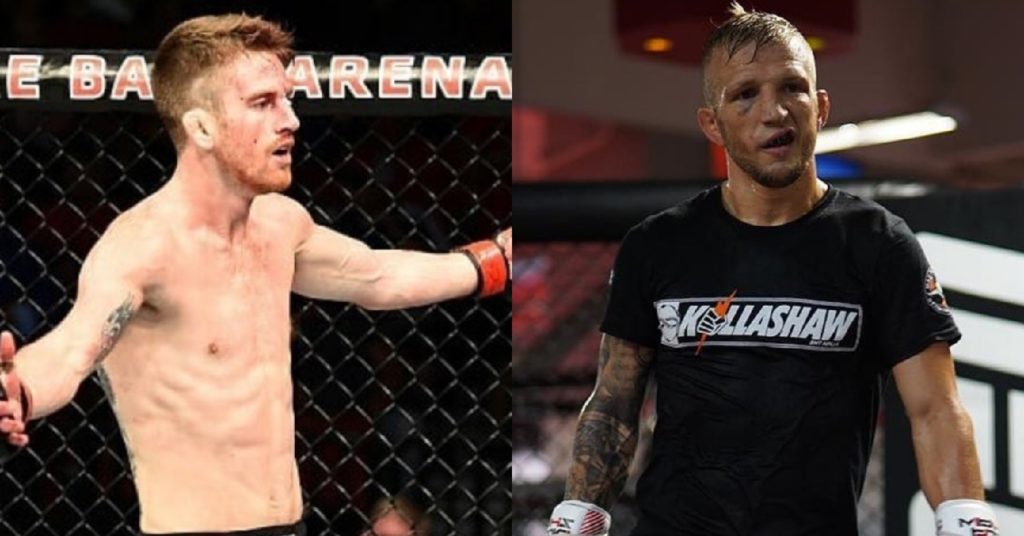 After his win over Marlon Moraes, Cory Sandhagen called for a fight with his former training partner TJ Dillashaw. Now he explains that decision and what it was like training with the former bantamweight champion.

Before he fought over the weekend, Sandhagen was already considered one of the best fighters in the stacked 135lb rankings. He only reaffirmed this when he got back in the win column with a second round TKO over former title challenger Marlon Moraes. However instead of setting his sights on the champion Petr Yan, he chose to call out a few names, including former champ TJ Dillashaw.

Now TJ Dillashaw has been on the sidelines for two years due to a USADA sanction, but his suspension is up early next year. With that in mind, Cory Sandhagen, who apparently trained with TJ on a few occasions, thinks that this return would like up perfectly for the next time he wants to fight. Speaking in a recent interview, he explained a bit about his history working with Dillashaw, and why he wants to fight the former champ when he is finally eligible.

“I used to train with Duane Ludwig also,” Sandhagen explained. “He’s a Colorado guy so I used to do some training with him a while ago, here and there. When he moved to California to coach at Alpha Male he just asked me to go out and spar with TJ for when he was going to fight (Renan) Barrao. So I was out there whenever that was, I think I was in college at the time. It was a few years ago.”

Sandhagen goes on to explain that the two trained together for a couple of years after this, when TJ and Ludwig moved back to Colorado. However that has not been the case in several years, as Dillashaw went back to California. That being said, Cory still knows that TJ will have a lot of hype around him in his return, and this is something that the bantamweight contender hopes to capitalize on for his own benefit.

“The timeline kind of lines up,” Sandhagen continued. “I would be looking to fight in January or February, and that’s when he’s back. He’s the biggest name that I can think of right now that would definitely be in the talks for a title when he does come back. I want to eliminate that argument he has right off the bat. I want to eliminate everyone’s argument right now, so that I’m the only one left.”

A win over TJ Dillashaw would certainly do a lot to boost the already high stock that Cory Sandhagen has. It will be curious to see how the UFC decides to handle the first fight back for the former champion. However it seems like this fight makes for a very good option.

Islam Makhachev Out of UFC 254 After RDA Tests Positive for Coronavirus
Read Next Post →
Click here to cancel reply.