Cerrone Only Made Flat Money

The two collided at UFC 246 in Las Vegas last month only for McGregor to come away with a dominant 40-second first-round TKO win. It was a big setback for Cerrone who received plenty of criticism for his performance.

To make matters worse, it seems like he didn’t earn a big payday for his troubles either.

Leading up to the event, Cerrone denied claims that he was earning millions up front and that was later proven to be true when it was revealed he was only earning $200,000 guaranteed.

Given the recent news that UFC 246 reportedly did 1 million pay-per-view buys, many had hoped that “Cowboy” at least earned points. That isn’t the case either according to an Instagram comment.

“Hahahahahaha 7-10 million I didn’t get PPV money 😂😂 What the world thinks and what really happens is so different. I made flat money.” 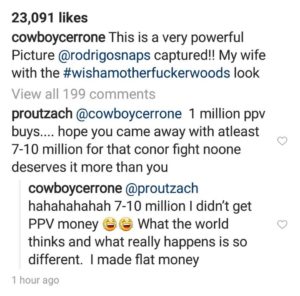 At the very least, Cerrone must have received some form of a locker room bonus from the UFC. But even then, it wouldn’t add up to the payday one would usually expect from facing McGregor.

Maybe it’s not a red panty night after all?