Burns wants to run things back with Chimaev, but this time, in a five-round fight rather than a three-rounder.

Gilbert Burns wants to run things back with Khamzat Chimaev.

Burns is coming off a unanimous decision defeat to Chimaev in their welterweight encounter at UFC 273 this past weekend.

However, it wasn’t easy for Chimaev, who showed he was human and took plenty of damage in a back-and-forth war with Burns.

While most observers had Chimaev winning two of the three rounds, a certain section of fans believe Burns also did enough to win two rounds.

Burns would certainly like to have a rematch with Chimaev down the line and believes it’s the least “Borz” can do for him. He also feels any sequel should be contested in five rounds rather than three.

However, “Durinho” acknowledged he may have to wait a couple of fights.

“The way I see it too, is that we’re not done,” Burns told TSN (via MMA Junkie). “I do believe we’re not done. For sure he moves forward in the rankings and they want to make that Colby (Covington) fight. But the way I see it, I’m not afraid to fight anyone in this division. Time and time again I’ve proved it. … I just want one thing back from Khamzat, I want the courtesy.

“I was No. 2 and I fought No. 11. I want a rematch with Khamzat. If he beats Colby, he’s going to fight Kamaru and I just want my rematch in his next three fights. I want my rematch and I believe we’re not done and one guy needs to get a finish. It’s just a fight that should’ve been five rounds. It should be more rounds and I think we kind of missed out a little bit on this fight.

Khamzat Chimaev To Gilbert Burns: I Will Take Your Soul In Five Rounds

Of course, it didn’t take long for these comments to reach Chimaev who took to Instagram to deliver a response.

While it would certainly be nice to see Burns and Chimaev run things back again in a five-round fight, it’s highly unlikely.

For Chimaev, his next fight will either be with Colby Covington or a welterweight title shot. As for Burns, he will be looking to rebound with a win and reenter title contention.

But down the line, it’s definitely a fight we may see again. 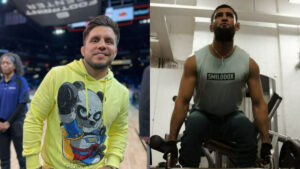 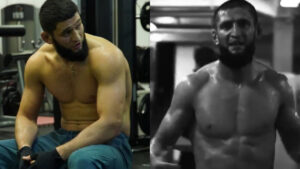 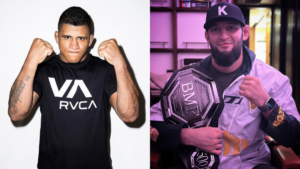 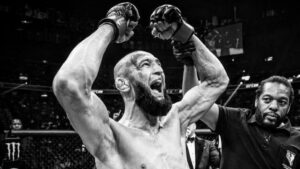