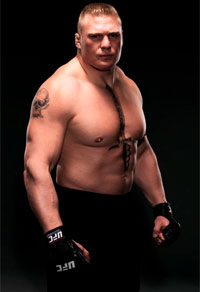 Normally I don’t even use the word ‘train’ and elect the UG friendly ‘trane’. An example would be, ‘Do you trane UFC?’. A few weeks ago I twittered (twatted?) something to Shane Carwin along the lines of ‘Dude, you’re a frate trane!’. In retrospect, he probably didn’t understand the ‘inside joke’ and instead, thinks I’m a complete idiot. An complete illiterate idiot (which is the worst kind of idiot). I haven’t heard back from him since but that could be because he’s too busy training with Optimus Prime and Mechzilla for his UFC 111 bout with Frank Mir in the Dirty Jersey.

Steve Cofield caught up with Randy Couture who has apparently been indirectly hired as Brock Lesnar’s ambassador. He spoke on Brock Lesnar’s behalf and told Cofield that not only is Brock Lesnar feeling amazing, dude has already started training.

“[Brock] said that he was training again, he wasn’t cleared yet to get on the mat. But he was back in the gym training and that he felt way better.”

Randy Couture later goes on to say that he feels ‘better than before‘ and he aims for a UFC return in Spring. When Lesnar was ill, it was reported that in his entire UFC career he was only operating at 60%. Lesnar won the UFC heavyweight belt going at 60%, dude is now operating at 100% capacity (and probably has a gnarly scar on his stomach to boot). [Source]