Big Nog out of UFC 108 with a NASTY staph infection 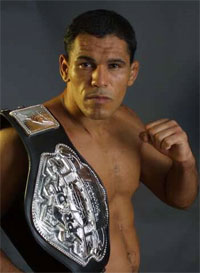 If you don’t know how severe a staph infection can get, may I point you to the direction of Kevin Randleman. Two years ago, Randleman had the nastiest staph infection civilization has ever witnessed. It’s not even debatable. Around this time in 2007, Kevin Randleman released a few pictures that instantly had the entire MMA world vomiting up their honey-nut cheerios. Dude had holes in his body. You could see his muscle tissue and for some odd reason his ankles swelled up to the size of grapefruits, Willy Wonka style. So when the news broke late last night that Big Nog had staph infection and was out of UFC 108, everyone completely understood. Check out what Ed Soares had to say about the ordeal.

“Yeah, Rodrigo’s got a pretty bad case of staph”

“There is no way that he could be prepared in time to face a fighter the caliber of Cain Velasquez.”

With Brock’s career potentially being done due to a mysterious illness, Carwin out of UFC 108 rehabbing his massive knee and Big Nog suffering from a nasty staph infection…it looks like the UFC heavyweight belt will be taking it’s own spiritual journey for a while. Isolated in it’s metallic case, look for the UFC heavyweight belt to find its spirit animal sometime in the near future. Alright, that’s just friggin…ridiculous. [Source]