Bibiano Fernandes and Gustavo Falciroli to Battle for Bantamweight Supremacy at One FC: Pride of a Nation

Right now it is 2012 and we are five years removed from the last PRIDE event, and it might finally be safe for fans to move on when looking at ONE FC’s upcoming event; ONEFC: Pride of a Nation. I don’t say this out of hyperbole or to spark a debate as much as I say it out of a place of respect. PRIDE was well known for their exciting fight cards that brought together some of the top talents from across the world to do battle against each other. That is exactly what ONE FC is doing at ONE FC: Pride of a Nation, and what it looks like they will continue to do. If you want proof, look no further than Bibiano Fernandes vs. Gustavo Falciroli.

Any fan of MMA will recognize the name Bibiano Fernandes, and recognize him as one of the top fighters in the world. Bibiano, the former DREAM Bantamweight and DREAM Featherweight Champion won both tournaments to secure those titles, and in his eight year long career has only seen three losses to some of the best fighters in the world; with his losses being to prime Urijah Faber, prime Kid Yamamoto and Hiroyuki Takaya. Since his most recent loss, where he lost the DREAM Featherweight Championship to Hiroyuki Takaya, Bibiano dropped in weight and went on to take the DREAM Bantamweight World GP and Championship in 2011 and has been waiting for the right opportunity in 2012. 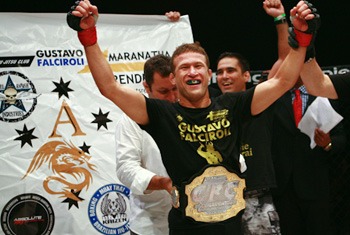 That right opportunity has arisen in the form of Brazilian-born Australian, Gustavo Falciroli inside of the ONE FC cage at ONE FC: Pride of a Nation. Falciroli made his ONE FC debut at ONE FC: Battle of Heros in Jakarta, Indonesia, making quick work of a very tough opponent in Soo Chul Kim in the first round with a rear naked choke. Falciroli is a very accomplished submission artist who isn’t afraid to use his hands when he has to, demonstrating knock out power a number of times in the past to go with his impressive submission victories. This makes him a dangerous opponent for Bibiano Fernandes, who is coming off of an injury from earlier this year that prevented him from competing in the UFC.

For Bibiano Fernandes, his ONE FC debut is a chance for him to continue building the legacy that he has worked hard to develop over the past few years. He was able to show Japan that he was one of the strongest fighters in the world when he fought for DREAM, and now he has that same opportunity to prove himself the best in the world in the ONE FC cage. Standing in his way will be the CFC Bantamweight Champion who is ready to step up into the big stage yet again and prove his mettle in his biggest challenge to date. Both fighters will have a lot to prove to the audience in Manilla when they step into the cage, with Falciroli looking to get the biggest win of his career and Bibiano looking to continue his dominance at Bantamweight.

Cesar Gracie says Greg Jackson's approach of coaching will not capture the imagination and trust of fans
Read Next Post →
Click here to cancel reply.