Antonio Silva’s US steroid ban is officially over 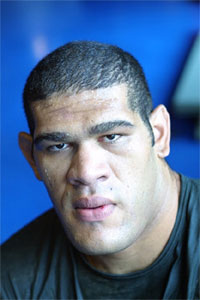 If you were named ‘Bigfoot’ and you enrolled in a nickname contest and somehow you lost, it was rigged. Being nicknamed after a mythical creature creature who is forever blurry when captured on camera is the highest honor anyone can bestow on a MMA fighter. If you look really close at Bigfoot Silva’s jaw, you can see an on/off switch that activates the force-field on his chin (he borrowed the technology from Scott Smith). All but two of Bigfoot’s wins have occurred within the first round and the dude only has one lost in his entire career (the switch was in the repair shop that night).

About a year ago Silva was accused of juicing up his Sasquatch body with anabolic steroids. He tried appealing, the appeal failed and Bigfoot was banned from competing in the US. Now he served his 12 months and…he wants to take on Josh Barnett. Antonio Silva apparently is a huge fan of irony…and running in the forest naked. Dude is about to bang against Big Jim York at Sengoku X and he had a little bit to say about…everything.

On Josh Barnett
“I definitely want to win this fight and try to have a go at him. I have three championship belts at home so I want the SENGOKU belt as well.”

On cutting weight for Sengoku X
“For one thing, that the Heavyweight limit in America is 265 pounds (120 kg) is a big reason (for the drop).”

On Satoshi Ishii
“He’s a flawless judoka. MMA is a different game but he’s a very enjoyable fighter. I trained with him at American Top Team but he’s one person I’d definitely want to try and fight. If he continues to build experience it will probably happen someday.”