Following his UFC Vegas 17 victory, Anthony Pettis gives an update on his free agency status, and plans to move back to lightweight

Over the weekend, Anthony Pettis fought the last fight on his UFC contract, beating Alex Morono. A few days later, Showtime gives an update on his negotiations, and looks ahead to what the future may hold.

Pettis has been with the UFC since they absorbed the WEC back in 2010. Since then, he has faced the best of the best at featherweight, lightweight, and welterweight, winning some and losing some, but even getting to the point of being the lightweight champ. There was once a time where Anthony was considered one of the brightest young stars that the promotion had to offer.

Prior to his welterweight bout with Alex Morono over the weekend, Anthony Pettis was clear about two things: he was moving back down to lightweight after this, and this was the last fight on his UFC contract. Speaking with SirusXM after his win, Showtime gave an update on the status of his free agency, saying that he will be meeting with his management team soon to disc his options. That being said, his main concern is fighting the toughest competition, which is something that he knows he will get in the UFC.

“I’m actually pretty involved. I want to know the offers, I want to know who’s making the offers. I feel like I’m in an upswing in my career right now, where I’m back motivated, back focused,” Pettis said. “I’ve never had an offer from another promotion… I’ve been with the UFC for so long, eleven and a half years under that Zuffa banner. So I don’t even know how that process really works.

“I’m excited to get with my team,” Pettis continued. “I’m actually going to Miami tomorrow to meet with them. I’m taking my daughter, so we’re going to go hang out in Miami a couple of days before Christmas, and kind of come up with a gameplay and see what opportunities are out there. The big thing for me is competition. I don’t want to lose that level of competition, because the UFC has the best of the best and some of the toughest competition out there for me. That’s what I’m definitely looking at, like who’s in the weight classes, who makes sense, and what fights are going to get me up to go train.”

As far as his move to lightweight is concerned, Anthony Pettis says that this was something he was already working on. He was working on some test cuts to drop back down, but changed course when he got the fight offer. However he still wants to return to 155lb and make another run at the lightweight title.

“I was on my way down to 155 actually, when this fight happened,” Pettis explained. “I didn’t think I was going to get a fight before the end of the year, so I was starting that weight cutting process down to get to 155, and I wanted to start early and just make sure my body was right and have some practice cuts. Then when this opportunity happened I had to switch gears and put some size on.

“That was my mindset, is I’m going to go back to 155lb,” Pettis continued. “Do a real run at this weight class, a real run at this belt, and see how good I can really get when I’m mentally prepared and my life outside the Octagon is exactly where it should be.”

🔊 "I feel like I'm on an upswing in my career right now. I'm back motivated, back focused." – @Showtimepettis shares his goals with his career and free agency with @jimmysmithmma on Unlocking The Cage 👊 pic.twitter.com/S7ihECQK74

Even in defeat, Anthony Pettis is competitive in almost every fight that he is in. So it would be interesting to see if he can get back to lightweight gold. That being said, with the recent cuts that the UFC has been making, there would be no surprise if he signed with another promotion instead. 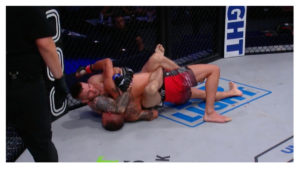